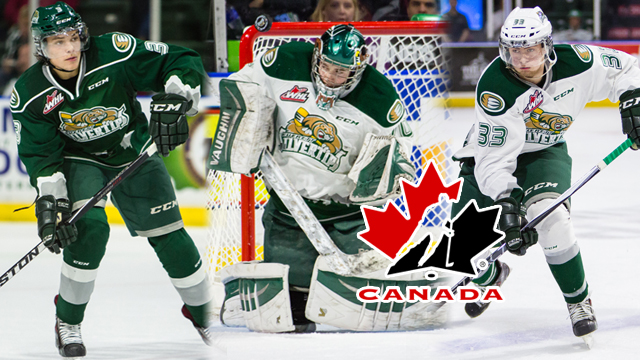 EVERETT – Everett Silvertips defenseman Noah Juulsen, goaltender Carter Hart and defenseman Jantzen Leslie have been named to the inaugural Hockey Canada National Teams’ Summer Showcase from July 29-Aug. 6 in Calgary, Alberta.  The camp puts all three players among the candidates to play for Team Canada at international events in their respective age groups:  Juulsen in the 2016 IIHF World Junior Championship, Hart in the 2015 U18 Ivan Hlinka Memorial Cup tournament and Leslie in the 2015 World Under-17 Hockey Challenge.

CLICK HERE for the complete camp rosters and schedules from Hockey Canada.

Juulsen, who is a projected early-round pick in this week’s 2015 NHL Draft, is one of 40 players (including 13 defensemen) who will take part in Canada’s National Junior Team Sport Chek Summer Development Camp.  The event includes practices on Aug. 1-2 and two games each against the Czech Republic (Aug. 4 and Aug. 6) and Russia (Aug. 3 and Aug. 5).  A final list of candidates will be assembled for Canada’s National Junior Team selection camp in December before 22 players are selected to represent Canada at the 2016 IIHF World Junior Championship, Dec. 26, 2015 to Jan. 5, 2016 in Helsinki, Finland.

Hart is one of four goaltenders and 43 total players chosen for Canada’s National Men’s Summer Under-18 Team selection camp from July 31-Aug. 4.  Following practices and three Red-White intrasquad games, 22 of those players will comprise Canada’s National Men’s Summer Under-18 Team for the U18 Ivan Hlinka Memorial Cup, Aug. 10-15 in Breclav, Czech Republic and Piestany, Slovakia. Canada has won the summer under-18 tournament seven consecutive years and ten of the last 11.

Leslie is one of 36 defensemen and 111 total players headed to Canada’s national under-17 development camp, which includes practices and a nine-game mini-tournament between six teams.  From the development camp, 66 players will be selected to represent Canada on one of three national teams – Black, Red and White – at the 2015 World Under-17 Hockey Challenge, which is scheduled for Oct. 30 – Nov. 7 in a to-be-determined host city.

The inaugural National Teams’ Summer Showcase marks the first time Hockey Canada has brought together all three of Canada’s national men’s programs in the same city at the same time.

“I would like to congratulate all 194 players selected to attend the Hockey Canada National Teams’ Summer Showcase,” said Ryan Jankowski, director of player personnel for Hockey Canada.  “This is a tremendous opportunity for Canada’s top talent to show our coaches and scouts how they can help Canada succeed on the international stage.”