Juulsen Selected by Montreal in First Round of NHL Draft 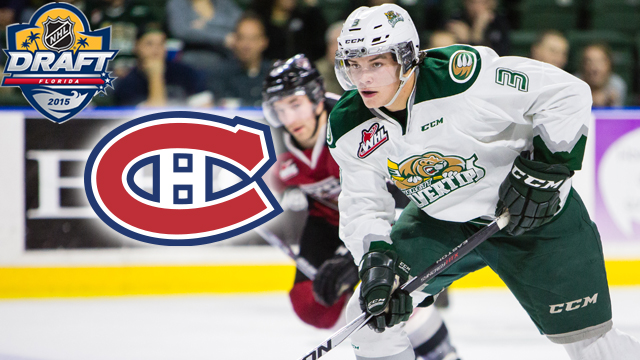 EVERETT – Everett Silvertips defenseman Noah Juulsen was selected by the Montreal Canadiens with the 26th overall pick in the first round of the 2015 NHL Draft Friday evening in Sunrise Florida, home of the NHL’s Florida Panthers.  Juulsen becomes the 18th Silvertips player chosen in the last ten NHL drafts and the seventh first-round pick in franchise history.

Juulsen, 18, joins Silvertips teammate Nikita Scherbak as the Canadiens’ last two first-round picks.  The Abbotsford, BC native ranked fifth on the team and ninth among all WHL defensemen with 52 points (9g/43a) in 68 games this past season.  He also finished second on the club with a +22 rating and ranked among the league leaders in powerplay points while logging significant minutes in all situations for the Silvertips.

Originally a fourth-round selection (70th overall) of the Silvertips in the 2012 WHL Bantam Draft, Juulsen played 59 games as a 16-year-old rookie during the 2013-14 season, notching ten points (2g/8a), 32 penalty minutes and a +12 rating.  Heading into next season, he is an underage candidate to make Team Canada for the 2016 IIHF World Junior Championship after recently being named to Canada’s National Junior Team Sport Chek Summer Development Camp.