Late Lead Slips Away against Royals 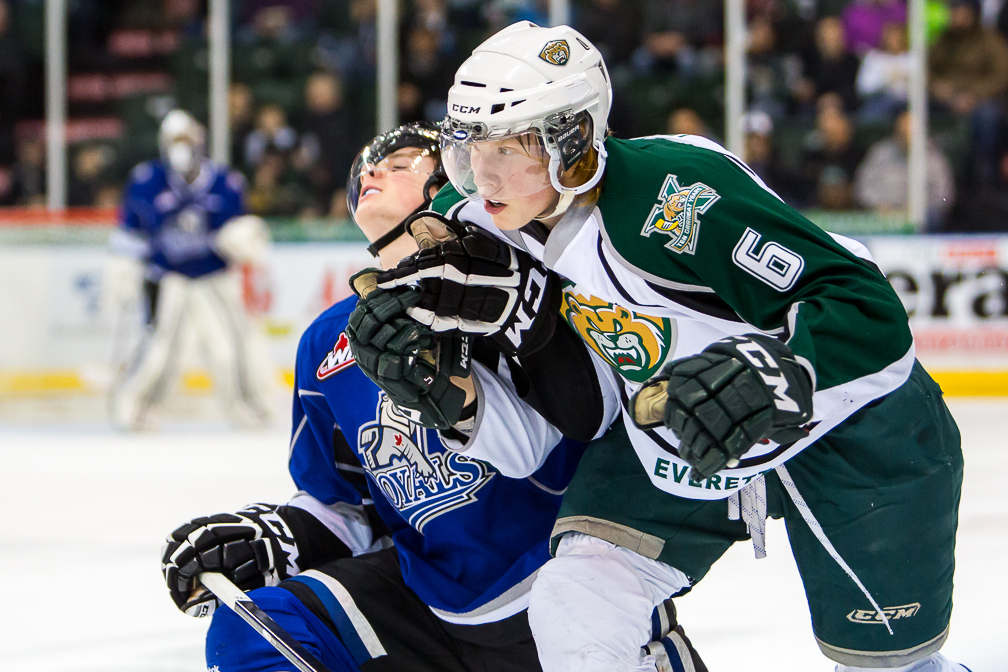 EVERETT – The Everett Silvertips were 2:23 away from a win Saturday night before the Victoria Royals tied the game late in regulation and then scored the winning goal in overtime to defeat the ‘Tips 4-3 in front of over 7,300 fans at Comcast Arena.  Despite gaining one point with the overtime loss, Everett is now locked into the #8 seed in the Western Conference playoffs thanks to the Seattle Thunderbirds clinching seventh place with the point gained in a 6-5 shootout loss to Portland.  The Silvertips will now face the Winterhawks in the opening round of the 2013 WHL playoffs.

Stathis Soumelidis and Brayden Low each scored one goal and set up another and Cole MacDonald chipped in two assists as all three players recorded their first multi-point games.  Defenseman Micheal Zipp and forward Matt Fonteyne, who was making his WHL debut as a 15-year-old, both posted their first career points with assists as well.  Manraj Hayer scored the other Everett goal as the Silvertips held leads of 2-0 and 3-1 in the contest.

Everett controlled most of the play in the first period, outshooting Victoria 15-7 and taking a 1-0 lead heading into the dressing room.  The ‘Tips got on the board when Manraj Hayer wove through traffic in front of the Royals net and scored on a top-corner backhand shot to give Everett an early lead.  The Silvertips generated a series of great scoring chances, but Victoria goaltender Michael Herringer kept his team in the game with a few key saves.

The teams traded two goals apiece in the middle frame to result in a 3-2 ‘Tips lead after 40 minutes of play.  Stathis Soumelidis made it 2-0 at 3:55 as he skated across the blue line and fired a long shot into the top corner over Herringer’s glove hand.  Victoria got on the board less than three minutes later, knocking a rebound past Austin Lotz in a scrum in front of the Everett net.

The Silvertips re-gained the two goal advantage on the next shift, with Fonteyne springing Soumelidis on the rush, where he fed Brayden Low in front for the finish and a 3-1 lead.  Victoria again responded quickly as Tyler Soy made a nice pass from the boards to the far post for Jack Walker, who banged it in to get the Royals back within one.  Shots in the second were 15-14 in favor of the ‘Tips.

The Silvertips killed off two crucial penalties in the third, but Victoria seized the momentum late in the period and then Logan Nelson scored with 2:23 remaining to tie the game and force overtime.  Everett pressured the Royals early in OT, but Joe Hicketts buried a centering feed at 1:57 of the extra session to snatch the 4-3 victory.

Austin Lotz (15-19-3-1) stopped 34 shots in net for the ‘Tips, while Michael Herringer (1-0-0-0) stopped 36 in his first career WHL start for Victoria.  The Silvertips matched their season high with 39 shots on goal in the game, while the Royals finished with 28.  Everett missed on all five of its powerplay opportunities, but killed off all three Victoria chances.

The Silvertips play one more game in the 2012-13 regular season, hosting the Tri-City Americans in their season finale Sunday afternoon at 5:05 pm at Comcast Arena.  Everett will then prepare for a best-of-seven, first-round playoff series against the Portland Winterhawks starting Friday night in Portland.  The complete series schedule will be released soon.

Single-game tickets for remaining home games during the Silvertips’ 10th Anniversary season at Comcast Arena are still available, and single-game playoff tickets go on sale Tuesday morning at 10:00 am.  2013 Silvertips playoff packages are on sale now.  For more information call 425-252-5100.  To keep up with all the latest team news and information, “like” the Everett Silvertips Hockey Club on Facebook or follow @WHLSilvertips on Twitter.