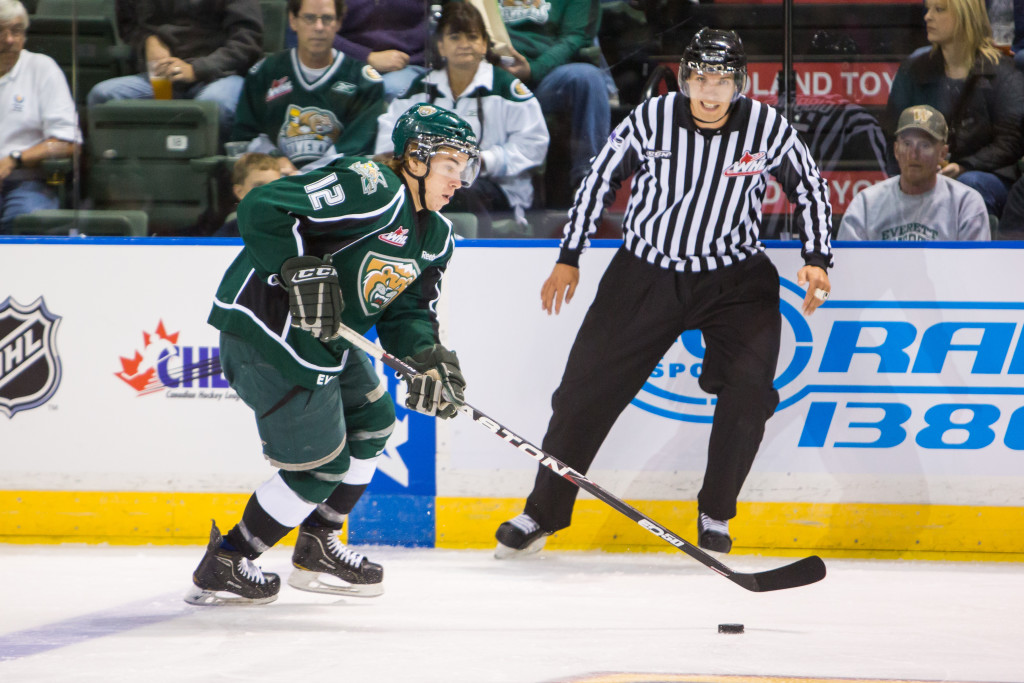 Leedahl (Saskatoon, SK) was the Silvertips’ second-round pick (#40 overall) in the 2011 WHL Bantam Draft.  He registered his first career WHL point against Red Deer on November 7, giving him one assist and 17 penalty minutes in 23 games with Everett this season.  Baudry (La Broquerie, Manitoba) is an Everett list player who currently plays for Steinbach in the Manitoba Junior Hockey League.  In 22 games with the Pistons this season, he has totaled 13 points (1g/12a) and 22 penalty minutes.

Team West is annually composed of players from Manitoba and Saskatchewan, and this season for the first time the roster will not hold a pre-determined 50/50 quota from each province.  As part of a collective effort to raise the productivity of the under-17 program the Team West roster will consist of the top 22 players deemed to be the best in the region, regardless of their home province.  Regional under-17 programs across Canada have been exploring changes to enhance programming and meet the goals to develop top athletes for Hockey Canada’s Program of Excellence (National Teams) which is a critical purpose of the World U-17 event.

Team West will consist of eight (8) Manitoban players and fourteen (14) from Saskatchewan. Out of the twenty-two player roster fourteen (14) currently play in the Western Hockey League (WHL), along with six (6) from Midget AAA, and two (2) from Junior A.

Team West has been selected out of a pool of sixty-eight players (68) 1996-born players who were invited to the Team West Summer Camp held in August at Wilcox, SK.  Summer Camp players were invited based on previous performances within each province’s Under-16 Program of Excellence in addition with feedback from a scouting network utilized throughout the 2011-12 season.  Don MacGillivray (Winnipeg) currently of the Winnipeg Blues will head Team West behind the bench along with assistant coaches David Anning (Winnipeg) of the Brandon Wheat Kings and Malcolm Cameron (Cole Harbour) of the Regina Pats.

The 2013 World Under 17 Hockey Challenge brings together the top players in the world born 1996 or later.  The tournament is made up of 10 teams; five (5) from Canada – Quebec, Ontario, Pacific (Alberta, British Columbia, Northwest Territories, Yukon), Atlantic (New Brunswick, Newfoundland and Labrador, Nova Scotia, Prince Edward Island) and West (Manitoba, Saskatchewan, Nunavut) and five (5) international teams including the United States.

Team West will compete in Group A at the World Under 17 Hockey Challenge with Team Pacific, Sweden, Finland and Russia.  Group B will comprise of the U.S., Slovakia, Ontario, Team Atlantic and Quebec. Team West will kick-off action on Friday, December 28th in their sole exhibition match versus Slovakia in Saint-Pierre-les-Bécquets, PQ.

The Under 17 program is the first stop in Hockey Canada’s Program of Excellence.  Many players who compete at the World Under 17 Hockey Challenge go on to represent Canada with the National Men’s Under 18 Team, National Junior Team and National Men’s Team.

For more information on the 2013 World Under 17 Hockey Challenge, please visit www.hockeycanada.ca/wu17