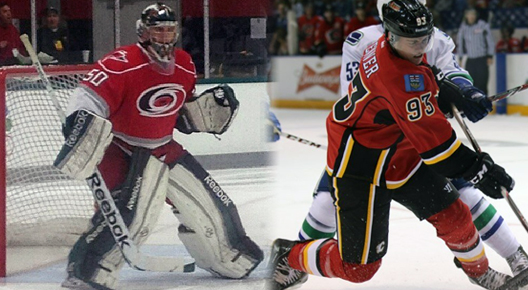 EVERETT – The Everett Silvertips today announced the return of goaltender Austin Lotz and forward Linden Penner to the club from their NHL training camps along with the reassignment of three players: forward Kyle Raymond, defenseman Jordan Wharrie and goaltender Nik Amundrud.

The moves leave Everett with 28 total roster players heading into the final weekend of preseason play:  17 forwards, nine defensemen and two goaltenders.  Four of the 28 are still with their respective NHL clubs:  Mirco Mueller with San Jose and Ben Betker, Jujhar Khaira and Reid Petryk with Edmonton.

Lotz, 18, played two games as an invitee of the Carolina Hurricanes during the 2013 NHL Prospects Tournament in Traverse City, Michigan, going 0-2 while facing a pair of former Silvertips teammates in Ryan Murray of the Columbus Blue Jackets and Nick Walters of the St. Louis Blues.  Penner, 18, saw action in one game with the Calgary Flames at the Young Stars Classic tournament in Penticton, BC, recording two penalty minutes in Calgary’s 4-1 win over the Vancouver Canucks.

Raymond, 17, skated in three preseason games for the Silvertips this year.  A seventh-round pick (136th overall) of the Silvertips in the 2011 WHL Bantam Draft, he appeared in four regular season games with Everett last season after signing with the club last November.  The Langley, BC native will next try-out for a spot with the Surrey Eagles of the Junior-A British Columbia Hockey League.

Wharrie, 16, signed with the ‘Tips last week and made his exhibition debut in last Friday’s 8-2 win over Portland.  He will return to his hometown to spend this season with the Port Moody (BC) Panthers of the Junior-B Pacific Junior Hockey League.  Amundrud, who turns 16 next month, saw his first preseason action in Saturday’s 8-6 victory over the Kootenay Ice.  From Melfort, SK, he was a third-round (59th overall) selection of Everett in the 2012 WHL Bantam Draft.  Amundrud signed with the Silvertips last October.

The Silvertips are currently preparing for their final weekend of preseason play:  a home-and-home set against the Seattle Thunderbirds.  Everett hosts Seattle Friday night at 7:35 at Comcast Arena before completing the exhibition schedule Saturday against the Thunderbirds in Kent.  The ‘Tips open the 2013-14 WHL regular season on home ice against the Prince George Cougars on Saturday, September 21.

Preseason tickets as well as season tickets and mini-game packages for the 2013-14 WHL season are available now at the team office.  Visit our website or call 425-252-5100 for more information.  To keep up with all the latest team news, “like” the Everett Silvertips Hockey Club on Facebook or follow @WHLSilvertips on Twitter.