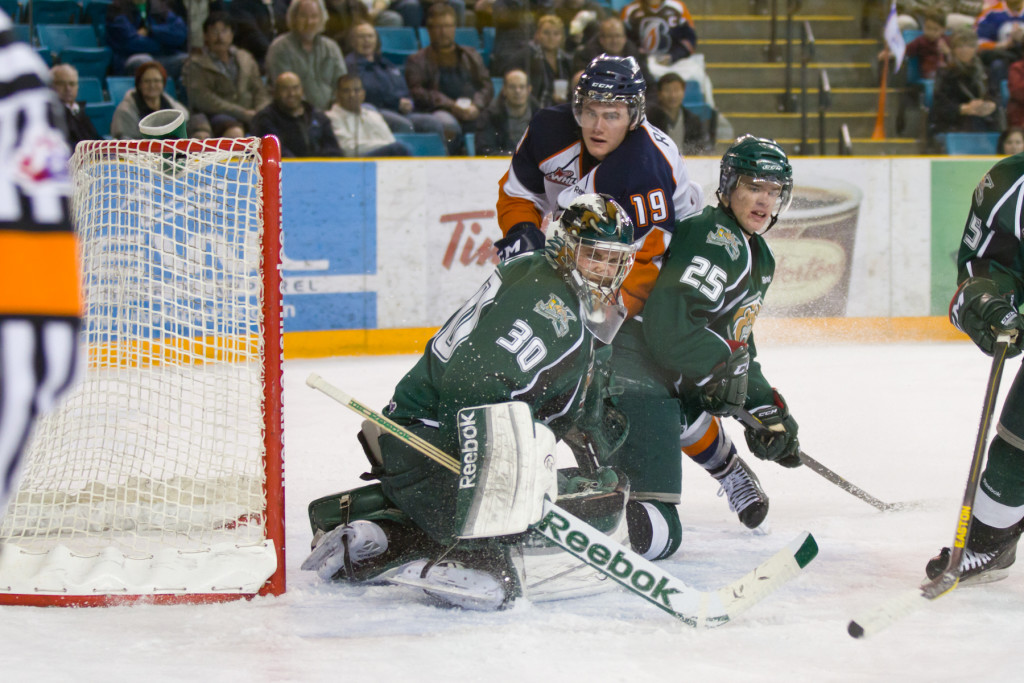 KAMLOOPS, BC – Goaltender Austin Lotz made a franchise-record 65 saves as the Everett Silvertips earned a point despite a 4-3 overtime loss to the Kamloops Blazers Wednesday night at the Interior Savings Centre.  Although Cole Ully’s overtime penalty shot goal for Kamloops ended Everett’s three-game winning streak, the Silvertips have still earned points in four straight games going into this weekend’s back-to-back set in Prince George against the Cougars.

Lotz (11-14-1-1) smashed the previous single-game Silvertips record of 55 saves, set by Kent Simpson last season against Portland.  While the Blazers outshot Everett 69-21 in total, an amazing 12-for-12 penalty killing effort and Ryan Harrison’s shorthanded goal in the third period combined with Lotz’ heroics to give the ‘Tips a chance at victory late in the contest.  Reid Petryk and Mirco Mueller also had goals for the Silvertips, who scored the first two goals in the contest.

The Blazers put 29 shots to the net in the first period alone (an Everett franchise record for a single period), but it was the Silvertips who found themselves on top 2-0.  With the ‘Tips on an early powerplay, Landon Oslanski drew in the defense before sliding a pass into the far circle to set up Reid Petryk’s one-timer that opened the scoring four minutes in.  Everett built on the lead later in the session when Brayden Low won an offensive-zone face back to Mirco Mueller, whose long shot snuck through traffic and past Cole Cheveldave for a 2-0 Silvertips lead.  Kamloops had four powerplays and outshot the Silvertips 29-6, but Lotz wasn’t beaten in the first 20 minutes.

Kamloops continued peppering Lotz in the second stanza and broke through when Tim Bozon received a centering pass with room to cut across the goal crease and beat Everett’s diving goaltender, getting the home team on the board with their 37th shot of the game.  The Blazers tied the game at 13:58 when Cole Ully put in the rebound of a Matt Needham shot and then took the lead as JC Lipon buried Colin Smith’s failed wraparound attempt on the back door 16 seconds later.  Despite three more Kamloops powerplays and a 50-11 shot disadvantage after two periods, the ‘Tips trailed by only one.

The penalty killers took over in the third period, turning aside five more Blazer powerplays – including their second lengthy 5-on-3 of the night – and scoring themselves to draw Everett even.  Kohl Bauml helped spring Ryan Harrison shorthanded into the Kamloops zone, where he drove the slot and rifled a perfect shot into the top corner at 5:40 to tie the game at three.  Lotz and the Silvertips hung on for the rest of regulation to gain a point and force overtime, where Ully was awarded a penalty shot at 1:17.  He cut across the crease on the chance before sneaking a shot inside the post on Lotz’ glove side to give the Blazers the 4-3 win.

The 65-save effort by Lotz was 15 saves better than his previous career high and brought him within seven saves of the WHL’s single-game record.  Cole Cheveldave (21-11-1-1) earned the win with 18 saves for the Blazers.  Killing off all 12 Kamloops powerplays gave the Silvertips the second-best penalty killing effort in franchise history.  The ‘Tips had just three opportunities themselves; scoring one time on the man-advantage.

Everett’s road trip continues with two more B.C. Division road games in Prince George against the Cougars on Friday and Saturday.  Opening faceoff for both games is set for 7:00 pm, with pregame radio coverage starting at 6:30 on Fox Sports 1380 AM.  The ‘Tips will then return to Comcast Arena to take on the Portland Winterhawks Tuesday at 7:05 pm.