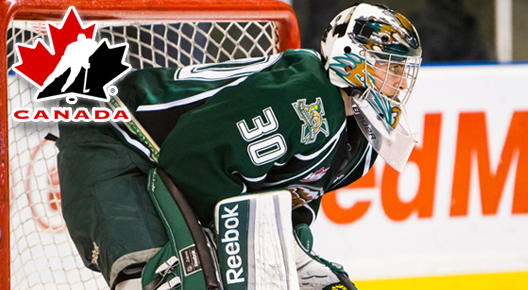 CALGARY, AB – Everett Silvertips goaltender Austin Lotz is one of 19 players invited by Hockey Canada, in partnership with the Canadian Hockey League, to the eighth-annual Program of Excellence goaltending camp taking place June 13-16 at the Markin MacPhail Centre at Canada Olympic Park in Calgary.  A total of six Western Hockey League goaltenders are among the camp invitees, four of whom are eligible for the 2013 NHL Entry Draft.

Lotz, who turned 18 on Monday, is ranked tenth among all draft-eligible North American goaltenders by NHL Central Scouting. The St. Adolphe, Manitoba native appeared in 42 games for the Silvertips during his second WHL season and first in a starting role, posting a 15-19-3-1 record to go with a .907 saves percentage, 3.37 goals-against average and one shutout.

In the postseason, Lotz helped lead Everett to a pair of victories in their first-round playoff series against the eventual WHL Champion Portland Winterhawks.  He then went on to join Team Canada at the 2013 Under-18 World Championship in Sochi, Russia, where the Canadians finished undefeated on their way to winning the Gold Medal.

“We have had terrific success with this camp in its first seven years, and we are excited to have Canada’s best young goaltenders work with some of the top instructors in the game,” said Brad Pascall, Hockey Canada’s vice-president of hockey operations/national teams. “We want to give these young goaltenders every opportunity to develop and prepare for international competition, and we feel this camp is a step in the right direction.”

The camp will be open to the public, free of charge.