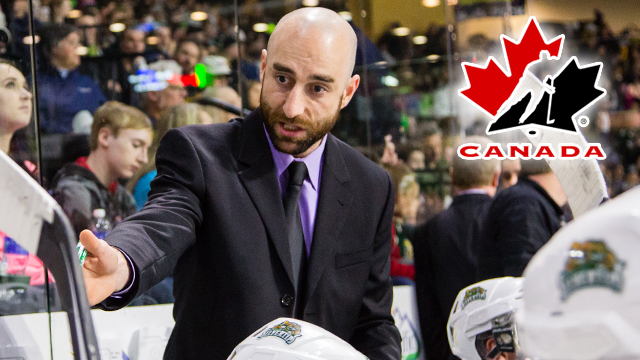 EVERETT – Everett Silvertips Assistant Coach Mitch Love has been tapped by Hockey Canada to serve as an assistant coach at the 2015 World Under-17 Hockey Challenge, earning his first opportunity to coach at an international event.  The tournament takes place Oct. 30 – Nov. 7 in Dawson Creek and Fort St. John, British Columbia.

“This is a great honor and opportunity for me as a young coach, and I’d like to thank Hockey Canada for having faith in me to be a part of the Program of Excellence,” said Love.  “I’m a Canadian boy who grew up watching the National Teams but was never good enough to represent Canada as a player, so it’s very special to be able to coach these high-level young players.  I look forward to working with and learning from Jamie Kompon, Gilles Bouchard and all the other great coaches with years of experience who are involved with Hockey Canada.”

Love, 31, enters his fifth season on the Silvertips’ coaching staff in 2015-16 and third alongside Head Coach Kevin Constantine. Working primarily with the defensemen, he has helped make Everett one of the WHL’s top defensive clubs over the past two seasons.  Everett was the WHL’s fifth-best defensive team in 2013-14 before rising to second in the league in goals-against last year.

The Quesnel, BC product played five years as a WHL defenseman, splitting three seasons between Moose Jaw and Swift Current before spending his final two junior campaigns in Everett.  He helped the inaugural ‘Tips advance to the WHL Championship series and captained the team as an overager before signing a free-agent NHL contract with the Colorado Avalanche.  He compiled 30 points and more than 900 career penalty minutes over the course of six professional seasons spent mostly in the American Hockey League.

The 2015 World Under-17 Hockey Challenge will bring together the top players in the world born in 1999 or later. The under-17 program is the first step in Hockey Canada’s Program of Excellence. Many players who compete at the World Under-17 Hockey Challenge go on to represent Canada with the National Men’s Under-18 Team, National Junior Team and National Men’s Team.  Since the first under-17 tournament (then known as the Quebec Esso Cup) in 1986, more than 1,200 NHL draft picks have competed in the event.