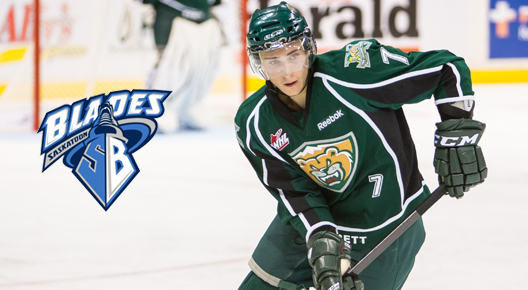 EVERETT – The Everett Silvertips today announced a trade that brings a conditional pick in the 2015 WHL Bantam Draft to the club from the Saskatoon Blades in exchange for the WHL rights to 1996-born forward Ty Mappin.  In three separate deals this week, the Silvertips have now acquired 19-year-old forward Zane Jones, 18-year-old forward Remi Laurencelle and a draft pick prior to today’s WHL trade deadline.

Mappin, 17, played one game for the Silvertips this season before being re-assigned to Junior-A with the Olds Grizzlies of the Alberta Junior Hockey League.  In 30 games with the Grizzlies, Mappin has 16 points (3g/13a) and 49 penalty minutes.  Selected in the first round (seventh overall) of the 2011 WHL Bantam Draft, the Big Valley, Alberta native totaled 17 points (5g/12a), 46 penalty minutes and a -26 plus/minus rating in 63 games with Everett as a 16-year-old rookie last season.

The ‘Tips are on home ice tonight at 7:35 pm for the first game of a home-and-home set against the U.S. Division rival Tri-City Americans at Comcast Arena.  Everett will then travel to the Tri-Cities for the rematch Saturday night at 7:05.  The Silvertips are back in action at home next weekend for a pair of games at Comcast Arena, hosting the Spokane Chiefs on Friday and the Moose Jaw Warriors on Saturday.