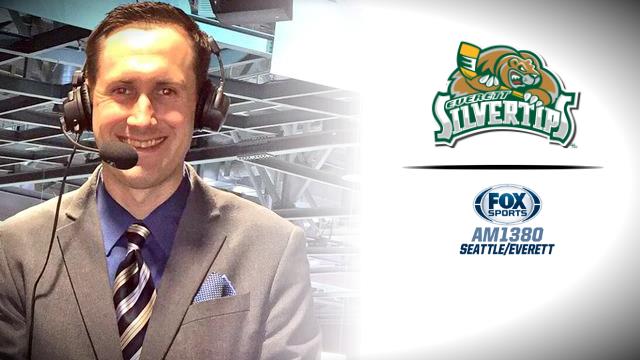 EVERETT – The Everett Silvertips today announced the hiring of Mike Benton as the club’s new play-by-play announcer for all regular season and postseason radio broadcasts on FOX Sports 1380 and Classic Country 1520 KXA.  As the new “Voice of the Silvertips,” Benton will also host the weekly Silvertips Hockey Show, handle media relations efforts, and contribute in the organization’s community outreach and digital media initiatives as Director of Broadcasting and Public Relations.

“We are very pleased to add a veteran broadcaster with a wealth of hockey experience to our organization in Mike Benton,” said Silvertips Assistant General Manager/Executive Vice President Zoran Rajcic.  “Mike is not only an accomplished broadcaster, but also brings a great deal of knowledge and ability to his PR and communications roles with the team as well.  We’re confident that he will be a good fit to continue the tradition of Keith, Jon and Travis in bringing Silvertips hockey to our loyal fans.”

Benton, 34, is an award-winning broadcaster with over 800 career games called in professional hockey on radio and television.  With the Alaska Aces of the ECHL most recently, he was honored by the Alaska Broadcasters Association for his work in play-by-play. During his time in Alaska, Benton launched the weekly “Aces Insider” radio talk show and the Aces’ official digital video channel, “AcesDTV”, while serving in several front office roles.

As the original voice of the ECHL’s Stockton Thunder, where he worked as the club’s Director of Broadcasting and Media Relations from 2005-13, Benton earned the league’s Media Relations Award of Excellence in 2009 and was selected three times as a radio broadcaster for the ECHL All-Star Game. During his time in Stockton, he contributed video and written web reports for the Edmonton Oilers and San Jose Sharks, and was an on-air sports host and anchor with KESP AM-970 in Modesto, Calif.

Throughout the last five years, he has served as a correspondent for SiriusXM NHL Network Radio and for two years was a color analyst and rinkside reporter with Sportsnet at the Vancouver Canucks YoungStars Tournament in Penticton, B.C. In addition to his experience in hockey, Benton carries nine combined seasons of on-air duties in minor league baseball, football, college basketball and television reporting assignments.

“It’s an extreme pleasure to accept and embrace an incredible opportunity to unfold a story, on-air each night with the Everett Silvertips and valued listeners throughout the Pacific Northwest,” said Benton. “For half of a century, the Western Hockey League has been a respected and prestigious breeding ground of future superstar talent of the National Hockey League and over the last 12 years, the Silvertips have rapidly established a remarkable reputation and hockey culture. My family and I can’t wait to integrate with a region that is very connected to our roots.”

A native of southern California and graduate of Azusa Pacific University, Benton earned his bachelor’s degree in Communication Studies while working at the college radio station. Mike, a former resident of Puyallup and Kirkland during childhood, will relocate to the area with his wife, Amy, and infant son, Lukas.  He becomes the fourth broadcaster in club history, following Keith Gerhart (2003-07), Jon Rosen (2007-11) and Travis Huntington (2011-2015).