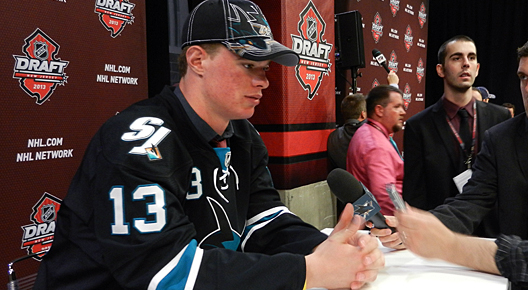 NEWARK, NJ – Defenseman Mirco Mueller became the sixth first-round NHL draft pick produced by the Everett Silvertips franchise Sunday afternoon when he was selected by the San Jose Sharks with the 18th overall pick in the 2013 NHL Draft at the Prudential Center in Newark, New Jersey, home of the New Jersey Devils.

Mueller’s selection gives the Silvertips a first-round pick in each of the last two NHL drafts, following Ryan Murray’s selection at second overall in 2012.  He becomes the 16th Silvertips player to be chosen in the NHL Draft in the past eight years – the last five of which have been defensemen.

Mueller, 18, was named the Silvertips’ Rookie of the Year after coming to Everett with the 11th pick in the first round of the 2012 CHL Import Draft.  The 6-foot-4 blueliner finished second among all WHL rookie defensemen in scoring last season, totaling 31 points (6g/25a) and 57 penalty minutes in 63 games.  He also appeared in six playoff contests for the ‘Tips, notching one assist and a +3 plus/minus rating.

Hailing from Winterthur, Switzerland, Mueller was ranked ninth among all North American skaters by NHL Central Scouting heading into the draft.  He was one of just a handful of 1995-born players to compete in the 2013 World Junior Championships, leading his team and finishing fifth in the entire tournament with a +7 rating.  He also represented the Swiss at the Under-18 World Championship and appeared in this year’s CHL/NHL Top Prospects Game.

Four other Silvertips players were listed in the final NHL Central Scouting rankings (goaltender Austin Lotz and defensemen Ben Betker, Ayrton Nikkel and Austin Adam), giving Everett an opportunity to have numerous other players selected as the 2013 NHL Draft continues.  For updates throughout the day, “like” the Everett Silvertips Hockey Club on Facebook, follow @WHLSilvertips on Twitter or check back here at www.EverettSilvertips.com.

For pick-by-pick coverage of the 2013 NHL Draft, CLICK HERE.

The Silvertips are currently preparing for our 11th year in the WHL.  Season ticket and mini-game packages for the 2013-14 WHL season are available now at the team office.  For more information call 425-252-5100.