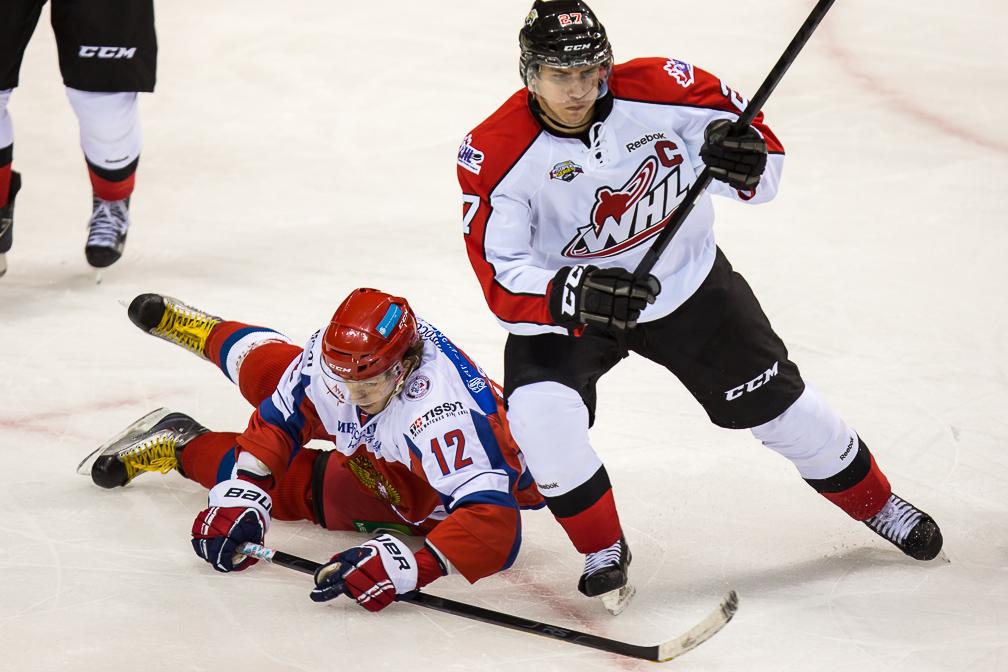 Vancouver, BC – Edmonton Oil Kings netminder Laurent Brossoit prevailed in a goaltenders’ duel, backstopping Team WHL to a 1-0 win in a shootout over Russia in Game 5 of the SUBWAY Super Series on Thursday night in front of 11,124 fans at Pacific Coliseum in Vancouver, B.C.  Silvertips defenseman Ryan Murray served as Captain of Team WHL for the game.

Brossoit, a 19-year-old product of Surrey, B.C., turned aside all 30 shots he faced through 60 minutes and then denied all three shooters he faced in the shootout to help Team WHL past Russia, who also got a terrific performance from Saskatoon Blades’ goaltender Andrey Makarov.

Sam Reinhart of the Kootenay Ice scored the decisive shootout goal on a nifty move as Team WHL converted three of their four shootout chances.  Hunter Shinkaruk of the Medicine Hat Tigers and Mark McNeill of the Prince Albert Raiders also found the net in the shootout.

The win gives the CHL a 3-2 edge through five games of the six-game series.

Russia got themselves to the shootout on the back of Makarov’s 35-save performance through regulation play.  The 19-year-old from Kazan was making his first appearance for Russia in the series, and was particularly strong in the third period as his side was outshot 12-7.

Both Brossoit and Makarov earned Player of the Game for their respective teams.

Team WHL finished 0-for-3 on the power play while Russia was blanked on two man advantage chances.

For more on the 2012 SUBWAY Super Series, visit www.subwaysuperseries.ca