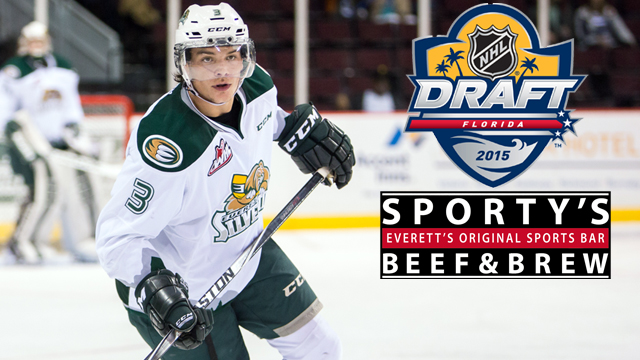 Join us this afternoon at Sporty’s Beef & Brew (6503 Evergreen Way in Everett) for the Silvertips official 2015 NHL Draft first-round Watch Party!  Join your fellow ‘Tips fans to talk hockey and you’ll have the chance to win great prizes signed by past and present Silvertips players as you see the next generation of WHL players become first-round NHL Draft picks.

Silvertips defenseman Noah Juulsen is ranked 22nd among all North American skaters and could be the seventh first-round pick in Silvertips history.  Juulsen is being projected to be picked sometime between the mid-first round and second round, which takes place when the draft resumes Saturday morning.

The first round of the draft starts at 4:00 pm, which is perfect timing for Sporty’s happy hour featuring select $5 appetizers, $2 and $3 draft beers and more!  Happy Hour usually ends at 6:00, but Silvertips fans can enjoy a special draft party happy hour extending until 7 pm tonight only!