NHL Draft Week with the Silvertips 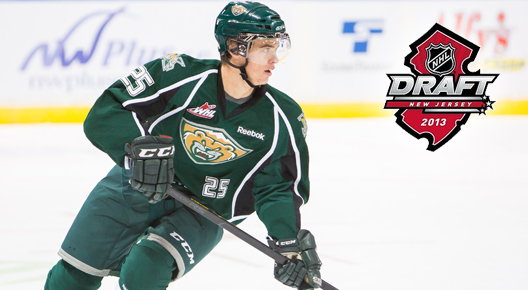 EVERETT – The 2013 NHL Entry Draft is coming up on Sunday at the Prudential Center in Newark, New Jersey, home of the New Jersey Devils.  Five members of the Everett Silvertips were listed in the final pre-draft player rankings by NHL Central Scouting and are hoping to hear their names called during this long-awaited day:  Mirco Mueller, Austin Lotz, Ben Betker, Ayrton Nikkel and Austin Adam.  The Silvertips are featuring a profile and interview with each one of these five players this week leading up to Sunday’s draft.

Don’t forget to join us Sunday at noon for our NHL Draft watch party at Sporty’s Beef & Brew as we gather around the big screen to watch Mirco Mueller become the sixth first-round NHL draft pick in Silvertips history! 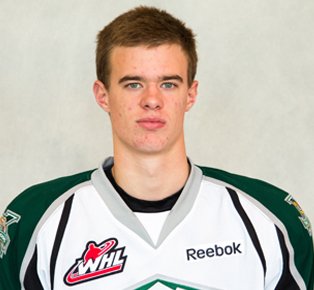 Rookie Silvertips blueliner Mirco Mueller burst onto the North American hockey scene last season after being selected 11th overall in the 2012 CHL Import Draft and is now expected to become a first-round NHL draft pick on Sunday. Making a nearly seamless transition to the WHL after coming over from his home country of Switzerland, Mueller soon inherited the role of Everett’s #1 defenseman following Ryan Murray’s season-ending shoulder injury in November.  He thrived on the increased responsibility, producing the second-most points of any rookie WHL rearguard (31 points on 6 goals and 25 assists) on his way to Silvertips Rookie of the Year honors.

Showing a great deal of poise under pressure, exceptional skating ability and strong hockey sense at both ends of the ice, Mueller displayed a remarkably well-rounded game at just 17 years old.  He represented the Swiss as an under-ager at the World Junior Championships and again at the Under-18 World Championships in addition to playing in the CHL/NHL Top Prospects Game.  Most mock draft projections have him being selected somewhere in the mid-to-late stages of the first round. 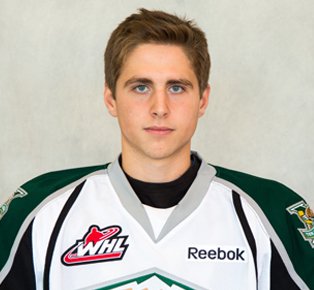 Acrobatic goaltender Austin Lotz turned more than a few heads as a first-year WHL starter for the Silvertips in 2012-13, continually upping his draft stock throughout the winter and into the spring.  A rookie year spent backing-up Kent Simpson as a 16-year-old prepared the Manitoba native for a chance to take over as Everett’s starting netminder last season.  Despite injuries and a few early-season stumbling blocks, Lotz showed steady improvement and increasing consistency during a 15-win regular season in which he compiled a .907 saves percentage and stopped 40 or more shots on nine occasions (including a franchise-record 65 saves vs. Kamloops in January).

An athletic goaltender with a penchant for highlight-reel saves, Lotz never gives up on a play and shows a competitiveness that should serve him well in the eyes of scouts.  He won a Gold Medal with Team Canada at the Under-18 World Championships this spring and recently attended Hockey Canada’s Program of Excellence Goaltending Camp in Calgary. 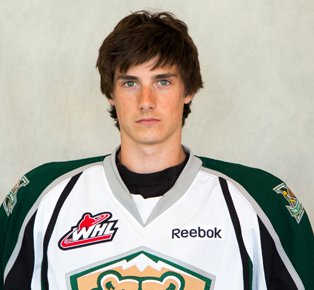 6-foot-5 defenseman Ben Betker has spent most of his young hockey career playing the underdog.  But if NHL scouts think enough of the potential they saw from the determined rookie last season, he may not be able to fly under the radar anymore as a 2013 NHL Draft pick.  Hailing from Cranbrook, BC, Betker climbed from major midget hockey at 16 and Junior-A at 17 to be named the Silvertips’ Most Improved Player following his 18-year-old campaign in the WHL.  Acquired from Portland in the trade involving fellow draft prospect Seth Jones, Betker finished with six points (1g/5a) and 100 penalty minutes while skating in 68 games for the ‘Tips last season.  He appeared at #147 in the final North American player rankings from NHL Central Scouting despite going unranked in both the preliminary and midterm reports.  Betker played regularly against opposing top-six forwards at even strength and on the penalty kill last season, showing his physicality, shut-down ability and a raw skill set which should continue to improve in the coming years. 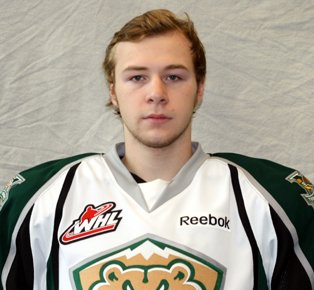 Versatile 17-year-old defenseman Ayrton Nikkel found his name in the NHL Central Scouting rankings throughout last season, finally landing at #149 following his second year in the Western Hockey League.  After spending his rookie season and half his sophomore campaign with the Brandon Wheat Kings, Nikkel came to Everett at the WHL trading deadline in January and played only seven regular season games before a hand injury sidelined him until the playoffs.   In only 49 appearances last year, the hard-nosed Kelowna, BC native racked up 13 fighting majors and 117 total penalty minutes to go with nine points.  Nikkel’s physicality, grit and willingness to drop the gloves combine with solid skating ability and likely yet-untapped offensive potential to make him a well-rounded prospect who has a good chance of being picked in the second half of the 2013 NHL Draft.

A sizeable defenseman with good mobility and a long reach, Austin Adam jumped up 20 spots to #175 in the final draft rankings from NHL Central Scouting after being placed 195th at the midterm.  Although the second-year Silvertip was limited to only 31 games last season due to injury, his late rise in the minds of scouts pointed toward his solid play late in the season.  He has produced seven points (3g/4a) in 77 career WHL games, but does his best work against opposing forwards at the defensive end of the rink.  Measuring in at 6-foot-5 and 190 pounds, Adam made his WHL debut as a 16-year-old rookie during the 2011-12 season after being selected in the fourth round of the 2010 WHL Bantam Draft.

The Silvertips are currently preparing for our 11th year in the WHL in 2013-14.  Visit our website throughout the offseason for updates on the 2013 NHL Entry Draft, CHL Import Draft and much more!  For more information call 425-252-5100.  To keep up with all the latest team news and information, “like” the Everett Silvertips Hockey Club on Facebook or follow @WHLSilvertips on Twitter.