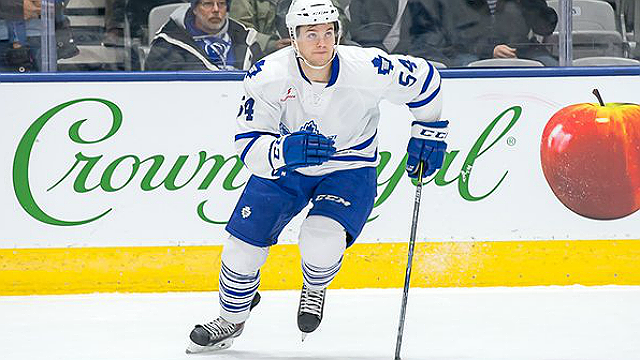 EVERETT, Wash. – Forward Byron Froese, who suited up in 142 games for the Everett Silvertips from 2008-10, made his National Hockey League debut on Saturday with the Toronto Maple Leafs at Bell Centre against the host Montreal Canadiens.

Froese, 24, recorded a pair of shots on goal, two hits and five face-off wins in 12:50 of ice time with Toronto, wearing #56. The 6-foot, 190-pound forward is the 14th player, all-time to suit up for the Silvertips and make his NHL debut.

Froese earned 118 points in 142 career games with the Silvertips, ranking third in goals (29) and fourth in points (61) in 70 games during the 2009-10 season. He was acquired along with a third round selection in the 2012 WHL Bantam Draft by Red Deer, from Everett on July 26, 2010 in exchange for forward Landon Ferraro and a conditional fifth round selection in the 2012 draft.

He has earned 80 points in 83 ECHL games with Toledo and Cincinnati, helping guide the Cyclones to the Kelly Cup Finals in 2013-14. In 147 career AHL games, Froese has 62 points (25g-37a) with Toronto, Rockford and San Antonio. He was recalled by the Maple Leafs from the Toronto Marlies on Oct. 23, 2015.

The Silvertips continue their four-game homestand on Wednesday, Oct. 28, in the only matchup of the season against the East Division’s Brandon Wheat Kings, led by defenseman and Philadelphia Flyers prospect Ivan Provorov. Opening face-off is 7:05 p.m. and radio coverage with Mike Benton and Al Kinisky starts at 6:30 p.m. (Fox Sports 1380/WHL Live).

Tickets for the game, presenting Midweek Madness, are available here. Green lower level seats are available on a “buy one, get one free” basis for just $10.