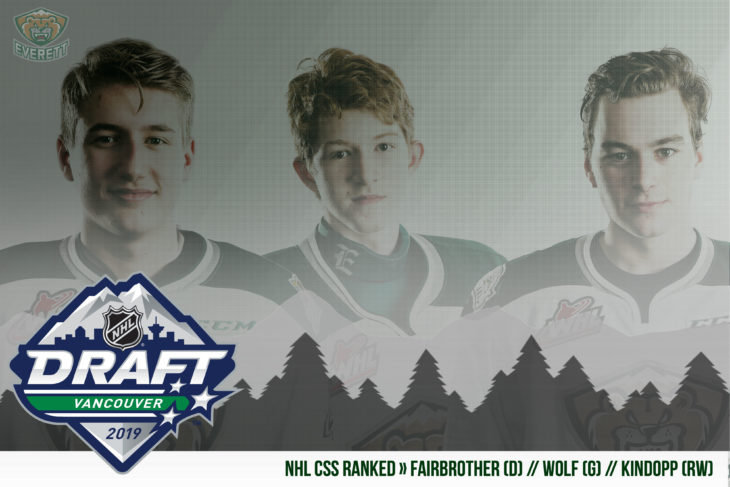 Three Everett Silvertips are ranked by NHL Central Scouting ahead of the 2019 NHL Entry Draft, scheduled for Jun. 21-22 in Vancouver, B.C. at Rogers Arena, the home of the Vancouver Canucks (NHL).

The Silvertips are aiming to add to their total of 22 players drafted to the NHL in 16 seasons. The WHL, starting on opening night of the 2018-19 season, had at least one alum on the rosters of all 31 NHL teams and 137 WHL alumni were on opening night rosters.

THE SEASON: Shattered career highs this season in goals (10), assists (26), and points (36), plus-minus (+23), and power play goals (4) in 64 games. The 6-foot, 195-pound defenseman had a career high four assists on Nov. 9 vs. Kamloops and six times this season recorded multi-point games … jumped 35 spots to his current position since the Midterm Rankings were released and has 41 points (12g-29a) along with 113 penalty minutes in 100 career WHL games, all with the Silvertips … was a part of last season’s Silvertips team that captured their second Western Conference title in franchise history and this year’s team that earned its third consecutive U.S. Division title (7th in franchise history) … has eight points (1g-7a) and a +11 rating in 35 postseason games.

Last season, the Silvertips had three players selected at the NHL Draft in Dallas, their most in one draft, in nine years: Connor Dewar (Minnesota), Riley Sutter (Washington), and Wyatte Wylie (Philadelphia).

The regular season schedule for the 2019-20 season will be announced soon, offering full 34-game season tickets, 22-game, and 14-game plans for as little as $215 total per seat. Deposits for $50 will secure a seat for the 2019-20 season, available at www.everettsilvertips.com/season or by calling (425) 252-5100 during normal business hours (Monday through Thursday during the offseason, 9am to 4pm).