Nikolishin Strikes in OT Again to Down T-Birds 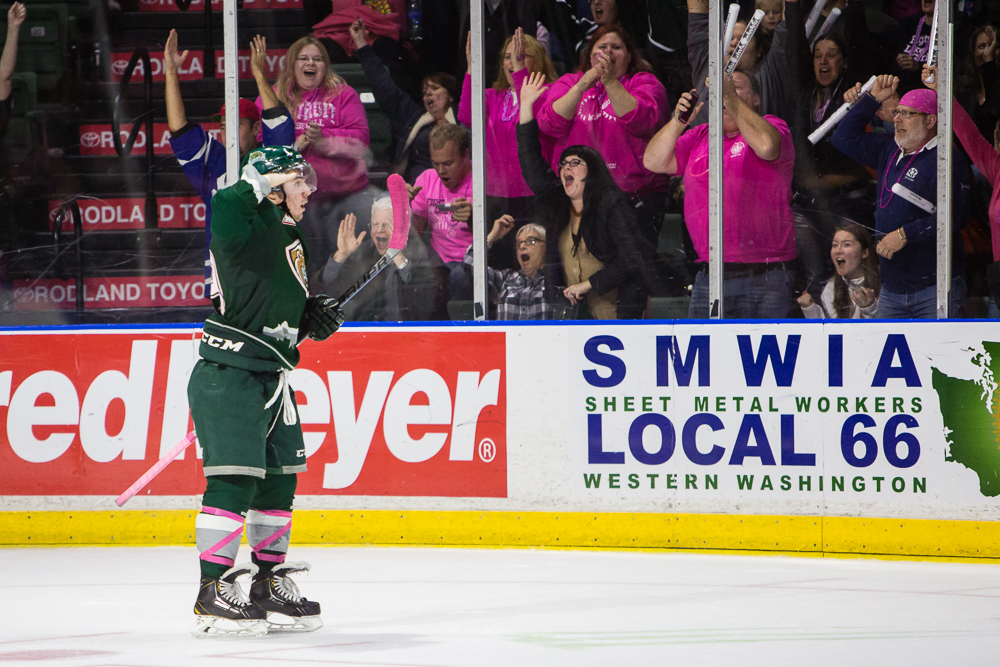 EVERETT – Ivan Nikolishin netted his second overtime game-winner in eight days to lift the Everett Silvertips to a 2-1 victory over the rival Seattle Thunderbirds on our sixth-annual “Pink the Rink” night Saturday at XFINITY Arena.  The ‘Tips remain in first place in the U.S. Division after the win at 8-1-2-1 for the season and improve to 2-0 against Seattle this year.

Nikolishin’s game-winning goal off a Nikita Scherbak pass came 41 seconds into overtime just as a powerplay expired after defenseman Cole MacDonald scored a powerplay tally in the third to erase a 1-0 Silvertips deficit.  Defenseman Kevin Davis tallied two assists, while Kohl Bauml recorded an assist and was named third star of the game.  Goaltender Austin Lotz (6-1-1-1) turned away 24 of the 25 shots he faced.

Everett got off to a good start in the first, but struggled to capitalize on their numerous scoring chances against goaltender Taran Kozun.  The Thunderbirds opened up scoring off the rush when Scott Eansor beat goaltender Austin Lotz along the far post from the slot to give the T-Birds a 1-0 lead.  Shots were 12-4 for the ‘Tips after 20 minutes of play.

The game got heated early in the second with several scrums during the opening minutes.  That trend continued as seven minor penalties were handed out during the middle frame.  The action didn’t translate into scoring however, with neither team finding the back of the net.  Seattle carried a 1-0 lead heading into the third with Everett outshooting the Thunderbirds by a 21-12 margin.

Although Seattle turned the tables and outshot the ‘Tips 13-8 in the third period, the visitors were unable to add to their lead.  When the Silvertips went on the powerplay in the third and turned the puck over, Austin Lotz stared down a shorthanded breakaway from Eansor and made two great saves to keep the deficit at one.  Shortly after during the same man-advantage, Cole MacDonald fired a low shot through traffic to the back of the net to tie the game at one.

In the final minutes of regulation, Seattle’s Justin Hickman was called for high-sticking to give the ‘Tips a powerplay chance that carried over into OT.  Just as Hickman stepped out of the box 41 seconds into the extra session, Nikita Scherbak set up fellow Russian Ivan Nikolishin for an open one-timer that he fired home for his fourth career overtime winner.

Seattle goaltender Taran Kozun (5-3-2-1) stopped 28 shots in net as the final shot count was 30-25 for the Silvertips.  Everett finished 1 for 5 on the powerplay and killed off all three opportunities for the T-Birds.

The Silvertips will now travel to Kamloops on Wednesday for their second meeting of the year against the Blazers at 7:05 pm, with radio broadcast coverage starting at 6:30 on Fox Sports 1380.  Everett then returns home to face the reigning Memorial Cup Champion Edmonton Oil Kings Saturday night at 7:05 pm at XFINITY Arena.