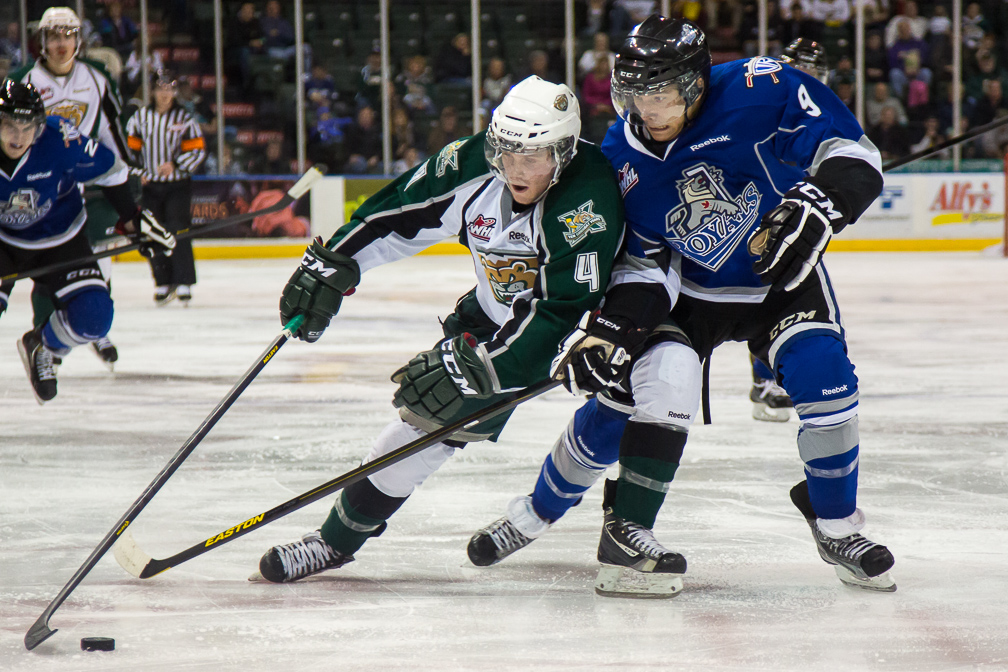 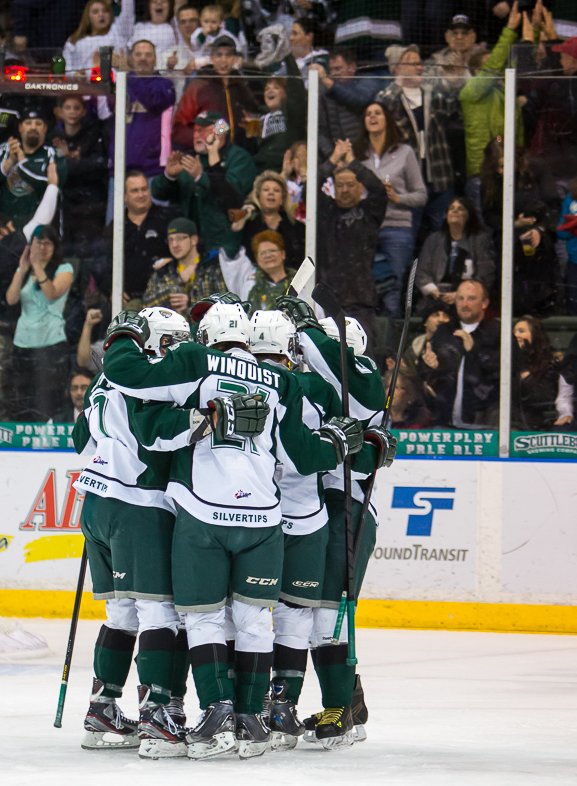 at Comcast Arena.  With four wins in six games since returning from the WHL’s holiday break, the Silvertips have leapfrogged the Seattle Thunderbirds into fourth place in the U.S. Division and seventh place in the Western Conference standings heading into Saturday’s home game against Portland.

Nine different Silvertips appeared on the scoresheet in the victory, led by Tyler Sandhu’s three primary assists and Ryan Harrison’s two empty-net goals that gave him a three-point night.  Connor Cox and Kohl Bauml each contributed a goal and an assist and Ty Mappin chipped in two helpers as well.  Two of Everett’s goals came on the powerplay as the ‘Tips ended an 0 for 23 drought with two goals on three powerplay opportunities.

Everett got off to a fast and physical start, grabbing an early lead on the powerplay.  Tyler Sandhu’s back-door pass from the low circle found a Connor Cox for a tap-in goal, his first as a Silvertip.  Stathis Soumelidis extended the lead after a Sandhu faceoff win, backhanding it over the glove of netminder Patrik Polivka.

Victoria’s first goal came on a powerplay deflection from Tim Traber just over one minute later to get the visitors on the board.  Trent Lofthouse tied the game in his return to Everett, making his way through traffic to create a breakaway before beating Lotz on his backhand.  The Royals took the lead with less than a minute left in the period when Brett Cote’s shot went off a skate in front into the net to make it 3-2 Victoria after one.

Everett scored three times in the second to re-take the lead heading into the final period.  On a 2-on-1 break early in the period, Kohl Bauml finished off a pass from Reid Petryk to tie the game early in the period.  The ‘Tips took a 4-3 lead when a shot by Connor Cox was blocked but the rebound came right to Cole MacDonald, who fired a laser inside the near post.  A late powerplay goal extended lead with only six seconds left in the frame as Josh Winquist finished off a beautiful cross-ice passing play from Tyler Sandhu and Ty Mappin. Shots were even at 23 through 40 minutes of play.

Victoria kept pressing in the third period, getting back within one goal with four minutes left when Austin Carroll shot the rebound of his own blocked shot into the net to make it 5-4.  The Royals then pulled their goalie for an extra attacker with two minutes left, allowing Ryan Harrison to notched a pair of empty-net goals to cement the 7-4 victory in the final minutes.  Time expired with a shot total of 33-32 in Everett’s favor.

With wins in each of their last four home games, the Silvertips will be right back on the Comcast Arena ice Saturday night against Portland.  Opening faceoff is set for 7:05 as the ‘Tips look for their first win of the year against the high-flying Winterhawks, who will carry a WHL-best 13-game winning streak into the contest.