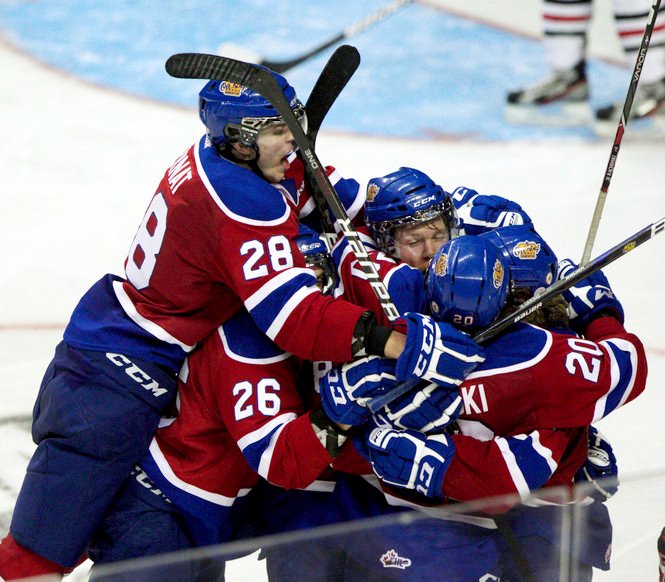 OIL KINGS KNOCK DOWN HAWKS IN OVERTIME – Rhett Rachinski scored 9:07 into overtime to lift the visiting Edmonton Oil Kings to a 4-3 win over the Portland Winterhawks in Game 4 of the 2012 WHL Championship series on Tuesday in Portland, OR.

With the victory, the Oil Kings knot up the best-of-seven series at 2-2, and regain home-ice advantage in the series.

Rachinski’s overtime winner was his second tally of the night.  Tyler Maxwell and Stephane Legault also scored for the Oil Kings, who held a 3-1 lead after two periods of play but allowed the Hawks to tie it up in the third frame, setting up the first overtime session of the series.

Sven Bartschi scored twice in the third period for the Winterhawks, who were scoreless on two power play chances but also blanked the Oil Kings on two man advantage chances.

Oil Kings’ netminder Laurent Brossoit turned aside 39 of 42 shots in the contest to post his 14th victory of the playoffs.  Mac Carruth made 38 saves in a losing cause for the Winterhawks.

The Oil Kings will host the Winterhawks for Game 5 of the best-of-seven series on Thursday in Edmonton, AB.  The Hawks will host Game 6 on Saturday.