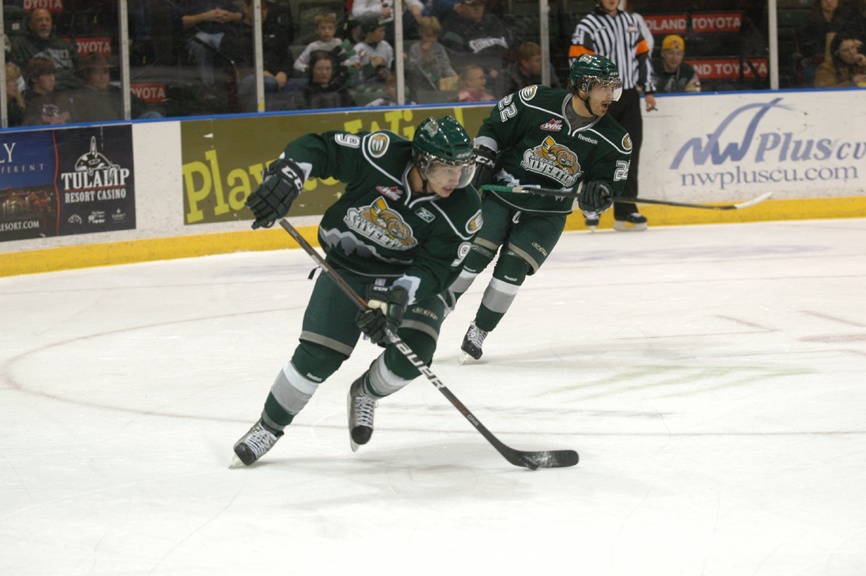 EVERETT, WA – The Everett Silvertips competed hard Friday night against Portland, but didn’t catch many breaks in a 7-3 loss to the Winterhawks at Comcast Arena.  The clubs combined to score five powerplay goals as Portland defeated Everett in regulation for the first time in three tries this year.  The ‘Tips will now face the Vancouver Giants Saturday night on home ice.

JT Barnett scored a goal and assisted on another in his Silvertips debut, while Brennan Yadlowski also posted two points on a goal and an assist.   Nick Walters tallied Everett’s other marker during the third period after the Winterhawks had scored three times to take control.  Portland scored on 3 of 6 powerplay chances, while the ‘Tips converted 2 of 6 in the contest.

The teams gave the Everett crowd a fast-paced first period with combined 29 shots on goal.  The ‘Hawks opened the scoring six minutes in when Troy Rutkowski’s wrister through traffic from the right boards found the back of the net.  Dillon Wagner extended Portland’s lead later in the period, putting a Sven Bartschi pass behind goaltender Kent Simpson.  Despite 13 shots on net, the Silvertips headed to the dressing room down 2-0.

The Winterhawks went up 3-0 in the second after Brad Ross tapped in a perfect back-door feed from Bartschi on the powerplay at 6:10.  The ‘Tips quickly answered after a hard-working shift when Brennan Yadlowski beat Mac Carruth with a shot just inside the post to get Everett on the board.  Ty Rattie notched Portland’s second powerplay goal midway through the period to make it 4-1, only to see the ‘Tips respond with a powerplay score of their own just over a minute later.  JT Barnett’s first goal as a Silvertip came when he one-timed Cody Fowlie’s centering feed into the net from the low slot to put Everett’s deficit at just 4-2 heading into the third.

Portland quickly turned the final period in their favor, killing off nearly a minute of 5-on-3 powerplay time for the ‘Tips and then going on the offensive.  Taylor Leier, Troy Rutkowski (on another powerplay) and Derrick Pouliot all scored goals in a span of exactly three minutes to put the game out of reach for the Winterhawks.  Walters added a late man-advantage tally for the Silvertips, but Josh Winquist was stopped on a penalty shot in the final minute to preserve the ‘Hawks’ 7-3 win.

The Silvertips’ homestand continues Saturday night at 7:05 pm when they tangle with the Vancouver Giants for the second time this season.  Everett will be looking to even the season series after Vancouver won the first matchup 6-5 back in late September.

Group tickets and mini-game packages for the 2011-2012 regular season can be purchased in person at the team office inside at Comcast Arena or by phone at 425-252-5100. Single game tickets are on sale by phone (866-332-8449), online (comcastarenaeverett.com) or at the Comcast Arena box office.