EVERETT – Recently graduated Everett Silvertips overager Landon Oslanski has hooked on with the Stockton Thunder of the ECHL on an amateur tryout agreement.  Oslanski is expected to make his professional debut Thursday when the Thunder faces the Alaska Aces in Game 3 of their second-round playoff series, which is currently tied at one game apiece.  Stockton is the ECHL affiliate of the NHL’s Edmonton Oilers. 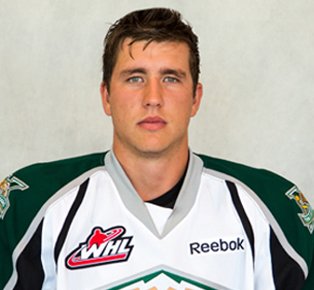 Oslanski, 20, completed his junior career with the Silvertips this season following three years with the Lethbridge Hurricanes.  After being claimed from Lethbridge off waivers just before training camp, Oslanski went on to become Everett’s second-leading scorer with 48 points this year.  His 17 goals were a single-season franchise record for a defenseman and his 31 assists led the team.  The only Silvertip to appear in all 72 regular season games, he also accounted for 96 penalty minutes and a team-high 23 powerplay points while splitting time between defense and forward.  He then contributed three assists and 19 penalty minutes in six playoff games.

A native of Camrose, Alberta, Oslanski shared this year’s team MVP honor with Josh Winquist and was also voted the winner of the F.I.E.R.C.E. Predator Award by members of the Everett Silvertips Hockey Booster Club.  He completed his junior career playing in 279 WHL games, finishing with 33 goals, 85 assists, 118 points and 335 penalty minutes.

With our 10th Anniversary season concluded, the Silvertips are now preparing for our 11th year in the WHL in 2013-14.  Visit our website throughout the offseason for updates on our head coaching search, the 2013 WHL Bantam Draft, NHL Entry Draft and much more!  To keep up with all the latest team news and information, “like” the Everett Silvertips Hockey Club on Facebook or follow @WHLSilvertips on Twitter.