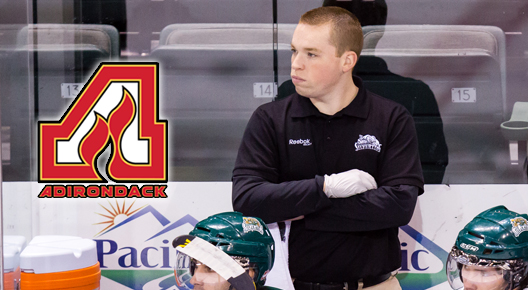 EVERETT – The Everett Silvertips of the Western Hockey League are proud to announce that Athletic Trainer Marc Paquet has been hired to work in the Calgary Flames’ organization, where he will become head trainer for the Adirondack Flames of the American Hockey League.  Located in Glens Falls, New York, the new Adirondack Flames replace the Abbotsford Heat as Calgary’s primary affiliate this fall.

“Marc has done a great job for us in three seasons and while we’re disappointed to lose him, we are very excited that he’s getting an opportunity to advance his career with the Flames,” said General Manager Garry Davidson.  “Our level is all about people getting experience to grow and develop, whether it’s players, coaches or members of our support staff.  I know Marc came here looking to do just that and advance to the next level, and we’re glad to see him get that chance.”

Paquet, 27, joined the Silvertips and Integrated Rehabilitation Group prior to the 2011-12 WHL season.  A native of Scarborough, Maine, he received his Athletic Training degree from the University of New England in 2009 and earned his Master of Education in Kinesiology from Bowling Green State University two years later.  With Adirondack, Paquet will oversee the health of Calgary’s NHL prospects – many of whom are WHL graduates.  Prior to the NHL and AHL seasons, he is expected to work with Flames prospects during next month’s 2014 Young Stars Classic tournament in Penticton, BC.

Silvertips training camp runs from Aug. 21-24 ahead of the annual Holiday Inn Preseason Classic tournament over Labor Day weekend at Comcast Arena.  Everett’s 2014-15 WHL regular season begins Saturday, Sep. 20 with a visit to the Seattle Thunderbirds.  Visit everettsilvertips.com for all the latest team news.  For more information, call the team office at 425-252-5100, “like” the Everett Silvertips Hockey Club on Facebook or follow @WHLSilvertips on Twitter.

zack dailey
PART 1: The Life and Times of Zack Dailey
10 hours ago