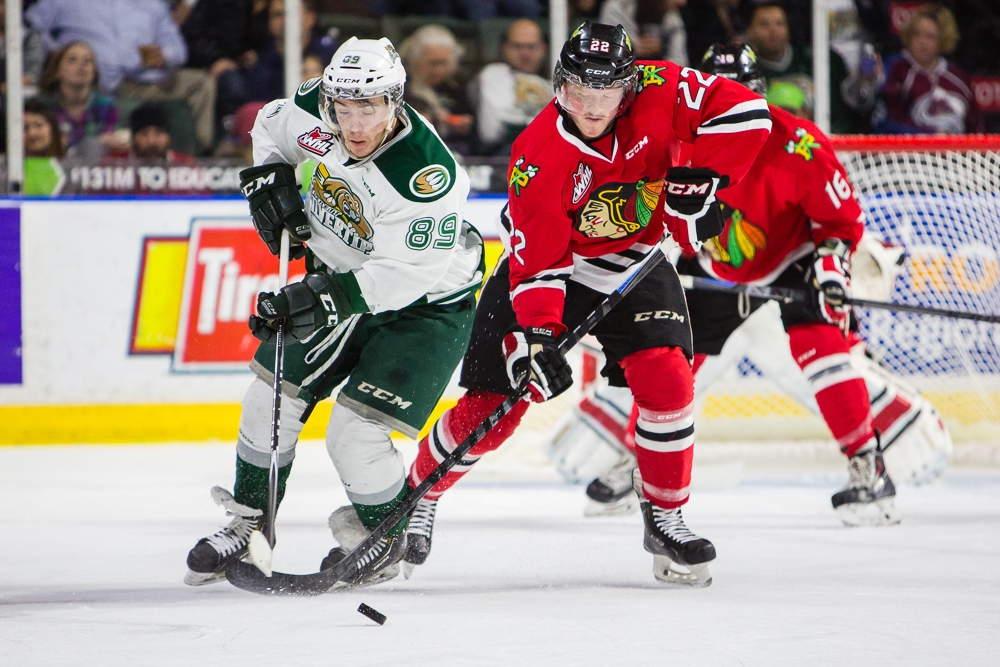 EVERETT – The Everett Silvertips played just over 80 minutes of hockey in their fourth overtime game in the 2015 playoffs Saturday night, suffering a 4-3 loss to the Portland Winterhawks on Oliver Bjorkstrand’s winning goal at XFINITY Arena.  The best-of-seven series is now tied 1-1 as it shifts to Portland with Games 3 and 4 coming Thursday and Friday.

Nikita Scherbak scored twice in the second period to pave the way offensively for the Silvertips.  Jake Mykitiuk opened the scoring in the game with his third goal of the playoffs, while Cole MacDonald recorded a pair of assists and was a +3 in the contest.  Goaltender Carter Hart (5-3) turned away 41 of 45 shots faced during 80:29 in net.

The Silvertips scored first for the second straight night to take a 1-0 lead in the first period as Carson Stadnyk fed the puck to Jake Mykitiuk, who released a shot to the top of the net from close range at 3:12.  Everett successfully killed off the first penalty of the game, but minutes later Blake Heinrich scored on a wrist shot off a Nic Petan pass to tie the game at one.  Portland then took their first lead of the series after Chase De Leo slid the puck under goaltender Carter Hart for a powerplay goal that made it 2-1 Winterhawks after one.

There weren’t many shots on net in the first half of the second, but Everett led 4-2 on the shot clock midway through the frame.  The Silvertips eventually broke through when Nikita Scherbak picked up a deflected Cole MacDonald shot in front and scored on his backhand to tie the game at two.  With less than a minute left in the frame, Scherbak deflected a shot from Ben Betker into the net to give the ‘Tips a 3-2 lead through 40 minutes.  Shots were 21-19 in favor of the Hawks.

With a tight game through the first two periods, the Silvertips came out strong to start the third period.  The ‘Tips had multiple scoring chances to extend their lead, but couldn’t find the back of the net.  Adam Henry scored for Portland on a wrap-around play at the midway point to tie the game at three.  That Winterhawks goal would be the last of regulation as the teams headed to overtime play with the ‘Hawks leading 32-27 in shots.

The ‘Tips came out buzzing in overtime as they controlled the momentum in the early minutes.  Everett forced Portland goaltender Adin Hill to make numerous crucial saves to keep the game in motion.  Nikita Scherbak nearly ended the game with a backhand chance in front, but the puck hit the post and eluded the back of the net.  The Silvertips outshot the Winterhawks 17-11 during the frame as the game continued into a second overtime.  Action in double OT was short-lived as Oliver Bjorkstard took the puck off a Petan faceoff win and cut through the slot to fire a shot into the top corner and end the game.

Action now shifts to Portland for Games 3 and 4 in the best-of-seven series, with the ‘Hawks and ‘Tips carrying one win apiece through two games.  Both games start at 7:00 pm with pregame broadcast coverage beginning at 6:30 on Fox Sports 1380.  Game 5 will be held at XFINITY Arena on Sunday, April 19th with a 4:05 pm puck drop.