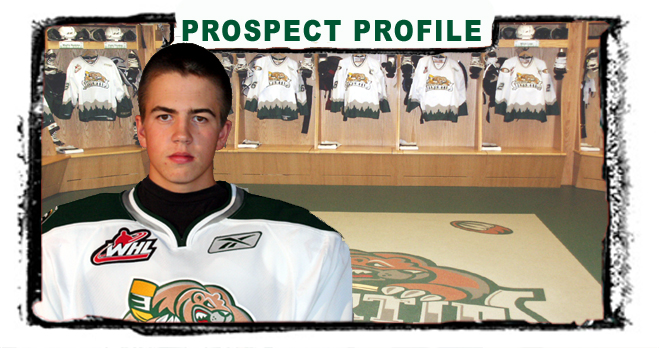 Silvertips forward prospect Kohl Bauml recently completed a season in which he tied for fourth in Saskatchewan Midget League scoring with 66 points (27-39-66) in 44 games and made it as far as the league championship series with the Saskatoon Contacts.  Soon to be entering his third training camp with the Silvertips after being selected in the third round of the 2009 WHL Bantam Draft, the friendly and well spoken Bauml took some time out of his off-season to talk some hockey with EverettSilvertips.com.

After several training camps, I imagine that you have one goal this year: to make the Silvertips.
Yeah, exactly.  I’m ready to come out to Everett, show my stuff, and hopefully give the Silvertips a taste of what I can do, and see if I can crack the squad next year.

How would you describe yourself as a hockey player?
I’m more of a pest.  Just kind of a speed guy who runs around and gets under peoples’ skin.  I don’t know, just battling and giving everything I have.   I’m known for playing a defensive role, just shutting guys down.

Are you friendly with some other Saskatchewan-based Silvertips prospects?
Some of the guys who were drafted recently – guys like Stadnyk and Leedahl – they’ve played with the Contacts, where I played the last couple of years.  I know those guys pretty well, and it’s good to know that they’re coming out to Everett as well.

What did you learn from the experience of practicing with the Silvertips last December in Saskatoon?
I learned a lot about the intensity and the speed at which the game is played.  I had a game that night, and from practice to the game in my own league, it was very evident that the WHL speed was a step up and that it took some adjustments.

Judging by the numbers, it looks like you were comfortable in an offensive role with the Contacts last year.
I was more of, I don’t know, not necessarily a go-to guy, but a few other players and I put up a lot of points together.  We all found great chemistry.  We were penalty killers and good defensive forwards, and went out to battle hard every night while scoring at the same time.  We used our speed and our passing abilities to get the puck in the net.

You seem to be pretty quick on your skates.
Speed is the biggest part of my game.  I’m not big enough to go around, smacking guys.  So I have to use my speed and agility to get around them.  It’s the aspect I’ve been working on my whole life.