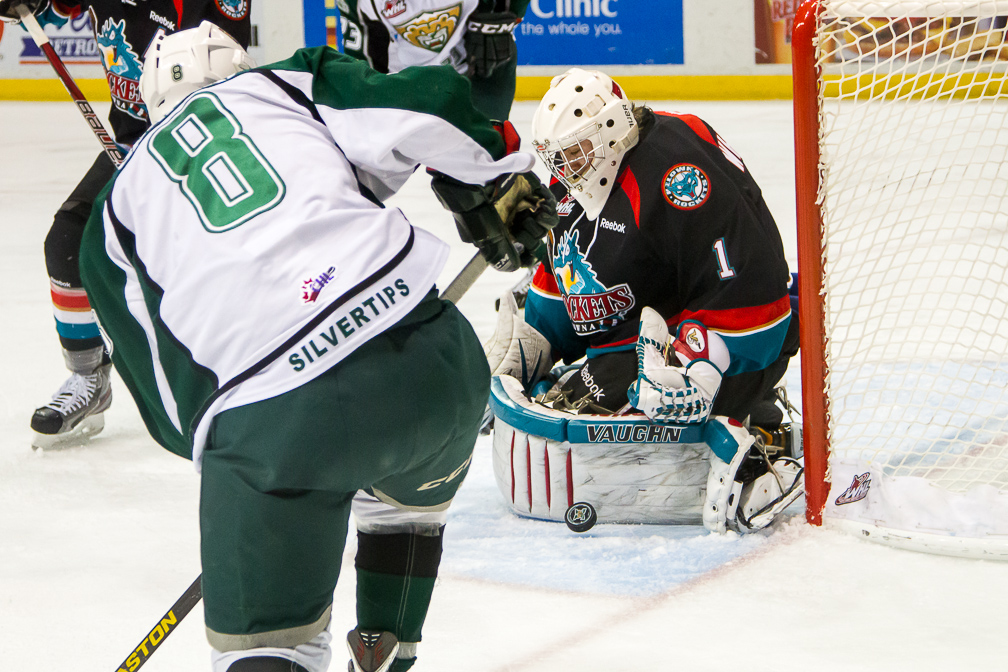 EVERETT – The Everett Silvertips surged back from a 3-0 deficit to control much of the final two periods, but came up just short in a 3-2 loss to the Kelowna Rockets Sunday evening at Comcast Arena.  After finishing the game with momentum and nearly tying it in the final seconds, the Silvertips will look to knock off the Rockets in the final meeting between the teams Thursday in Kelowna.

Ty Mappin and Manraj Hayer scored powerplay goals for the Silvertips, who rallied from 3-0 down to get within one.  Everett outshot Kelowna 21-11 over the last 40 minutes, but wasn’t able to managed the equalizer to force extra time.  Four of the game’s five goals were scored on the powerplay – with the other coming seconds after a man-advantage expired – as the Silvertips went 2 for 6 and the Rockets finished 2 of 7.

Everett snatched the momentum early in the first, but ran into penalty trouble as the Rockets took control with three consecutive two-man advantages.  Kelowna got on the board during the first 5-on-3 powerplay after a blocked shot found the stick of Colton Sissons, who rifled it into an open net at10:26.  Ryan Olsen re-directed a shot from Sissons inside the far post less than a minute later during another two-man advantage, and then the Rockets made it 3-0 just four seconds after their fifth powerplay expired as JT Barnett banged in a rebound out front at 14:04.  Kelowna outshot Everett 14-8 in the first and carried a 3-0 lead into the locker room.

The Silvertips stormed back in the second with two powerplay goals of their own to make it a 3-2 game.  During a two-man advantage for Everett midway through the period, Ty Mappin picked up the rebound of a Mirco Mueller shot at the side of the net and banked it in off goaltender Jackson Whistle to get the Silvertips on the board.  The ‘Tips picked up a second powerplay goal as Reid Petryk centered the puck to Manraj Hayer, who stuffed in his own rebound to bring Everett within one.  Ryan Harrison was hauled down on a partial breakaway and awarded a penalty shot later in the period, but Whistle shut the door to keep the ‘Tips one goal down despite a 12-4 shot edge in the second.

Everett came close to tying the game in the third on a number of quality scoring chances, but Whistle held off the charge with key saves to maintain Kelowna’s one-goal edge.  Reid Petryk nearly tied things up in the dying seconds of the game, putting a shot off the crossbar and through the crease before the horn sounded.  Finals shots were 29-25 in favor of the ‘Tips after 60 minutes of play.  Daniel Cotton (9-14-0-2) turned away 22 shots for Everett in the loss, while Jackson Whistle (12-2-1-0) stopped 27 in net for the Rockets.

The Silvertips and Rockets meet again on Thursday in the next game for both teams, this time at Prospera Place in Kelowna.  Everett will then return home for a pair of U.S. Division games at Comcast Arena, hosting the Spokane Chiefs Friday at 7:35 pm and the Seattle Thunderbirds Saturday at 7:05 pm.