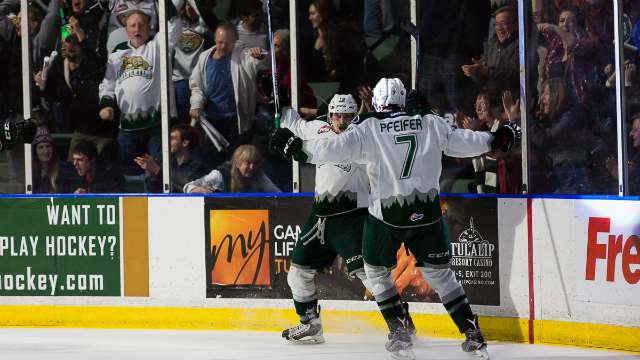 EVERETT, Wash. – Remi Laurencelle’s dramatic game-winning goal with 15.3 seconds left in regulation finished his eighth multi goal game of the season, delivering a 4-3 victory for the Everett Silvertips over the Seattle Thunderbirds before a crowd of 7,876 at XFINITY Arena on Saturday night in WHL action.

Laurencelle’s game winner answered Ethan Bear’s game-tying goal with less than two minutes left in regulation, supplying Everett’s sixth win in seven games (6-0-1-0) in the season series against the Thunderbirds and a five-point lead for first place in the U.S. Division with 14 games remaining.

Carson Stadnyk (power play) and Devon Skoleski also scored for Everett, while Noah Juulsen chipped in with a pair of assists. Carter Hart earned the win in net with 20 saves, his 32nd which moved into third on the Silvertips single-season wins list.

Donovan Neuls crashed the Silvertips net and converted on a freak bounce and loose puck at the crease for a 1-0 lead, 3:26 into the first period for a power play goal. But the Tips leveled the game on Skoleski’s sixth goal of the season, 5:14 into the game to break a 32-game drought when he wired a wrister past Logan Flodell’s glove.

Stadnyk then slammed a backdoor feed by Matt Fonteyne for a 2-1 lead for his 16th goal of the season, after the Silvertips won an offensive zone face-off and Noah Juulsen calmly fed a cross-ice pass to Fonteyne, stationed at the left circle. Skoleski nearly cashed in for a 3-1 lead, but his forehand bid while attacking the net was turned away by a remarkable glove save from Logan Flodell with 30 seconds left.

Laurencelle then busted a 13-game goal scoring drought for his Silvertips leading 26th goal of the season, 18 seconds into the third period for a 3-1 cushion when he snuck a low wrister through traffic from inside the blueline. But a penalty issued to Noah Juulsen for holding the stick set up Ryan Gropp’s power play goal, a wrister off the rush from the left circle which sliced the deficit to 3-2 at the 1:23 mark.

The Silvertips managed the puck for a large bulk of the third period but fell victim to a hooking penalty called on Laurencelle, and Ethan Bear followed up a blocked shot with a slapper through traffic for the 3-3 tie with 1:54 left in regulation.

That set the stage for Laurencelle’s theatrical winner. Carson Stadnyk intercepted a pass at the red line and had controlled zone entry against the Seattle defense. His shot from the left wing was blocked, but Laurencelle, streaking through traffic, slammed the ricochet past Flodell’s glove for the 3-2 lead, sending XFINITY Arena into pandemonium.

Seattle worked the puck into the Silvertips zone with a sixth attacker but failed to get a shot on net, and the Tips ended Seattle’s four-game win streak with a record hiked to 17-10-1-0 against opponents from the U.S. Division.

Flodell, making his first start against the Silvertips since Dec. 12, made 32 saves to take the loss.