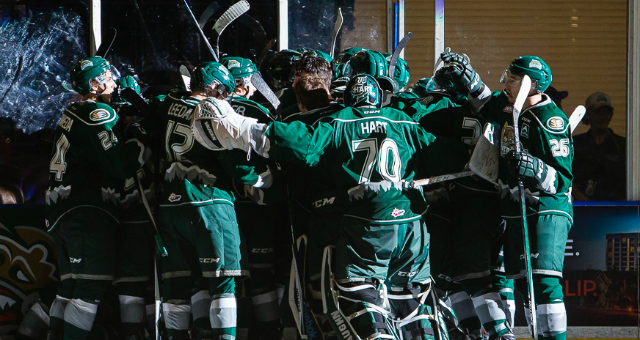 EVERETT, Wash. – Remi Laurencelle scored twice, including the game-winner, and added an assist to help lift the Everett Silvertips to a 5-4 victory in sudden death overtime over the Spokane Chiefs, before 6,645 fans at XFINITY Arena on Saturday.

The Silvertips, opening their home schedule with a victory in their first of ten meetings with Spokane this season, won for the third time in four games behind Carter Hart’s 25 saves which included a crucial penalty shot stop in the second period. Riley Sutter (making his Silvertips home debut) and Kevin Davis each contributed with a pair of assists.

The power-play also came through with its most productive night of the early portion of the season, racking up a 3-of-5 effort after starting the season at a 1-of-10 clip.

With a large crowd waiting in anticipation, Jason Fram potted a surprise game opening goal, a wrister through traffic from the point for a 1-0 Spokane edge at 12:59 of the first period. The Silvertips made good on their third power play of the period when Sutter and Laurencelle connected for a chance at the left circle, and Dawson Leedahl stuffed the rebound past Garret Hughson for a 1-1 tie and power play goal with 1:34 left.

The second period presented an eruption of six combined goals, leaving the teams deadlocked again, 4-4 after 40 minutes. Fram’s second goal of the game, on the power play, put Spokane ahead 2-1 just 46 seconds in when he converted a backdoor play at the left circle. But Matt Fonteyne answered on a breakaway, sneaking a forehand deke past Hughson’s blocker at 3:13.

Spokane regained the lead, 3-2 on Hudson Elynuik’s power play goal, forcing an end-over-end shot that glanced off Cole MacDonald’s face at 6:09, requiring medical treatment for the remainder of the second period. With the Silvertips missing an important part of their blueline, Carter Hart then needed to make a glove save on Kailer Yamamoto’s breakaway to keep the one-goal deficit intact with 8:02 left, and the Silvertips responded.

Graham Millar went to the right post and finished Patrick Bajkov’s backdoor feed, off the rush at 13:47 to tie the game, and the Silvertips posted their third straight power play goal on Kevin Davis’ point shot, glancing off Laurencelle for a 4-3 cushion with 4:19 left.

The frenzied pace continued and the Chiefs struck back just a few shifts later. Evan Fiala cradled a cross-ice pass from Markson Bechtold and snuck a wrister through Hart’s five hole at 17:20, tying the game.

Both teams adjusted to a more physically disciplined approach and carried the tie into overtime, but Spokane needed to survive an Everett flurry at the net which nearly produced a game-winner with 30 seconds left, on a Cole MacDonald chance at the left circle.

In the overtime session, Carson Stadnyk controlled the puck, skated to the left circle and fired a dart to Laurencelle at the right post, who slammed the one-timer to the back of the net at the 2:08 mark, sending XFINITY Arena into a frenzy and the Silvertips flying off the bench with the winner.

NOTES: The Silvertips scratched Tristen Pfeifer, Jantzen Leslie, Brian King and Yan Khomenko … the Silvertips outshot the Chiefs, 39-29 … dating back to the end of last season, Laurencelle has 11 points in his last 11 games … Patrick Bajkov extended his scoring streak to four games … the Silvertips improved to 6-5-1-1, lifetime in home openers after dropping an overtime defeat last season to Kelowna … Leedahl, like the 2013-14 season, scored the first Silvertips home goal of the season.

The Silvertips return to play tomorrow with their only matchup of the season with the Prince Albert Raiders, starting at 4:05p.m. (1520 KKXA/WHL Live) from XFINITY Arena. Mike Benton and Al Kinisky will handle coverage 30 minutes prior to opening face-off with the Silvertips pregame show, presented by Everett Bone and Joint.