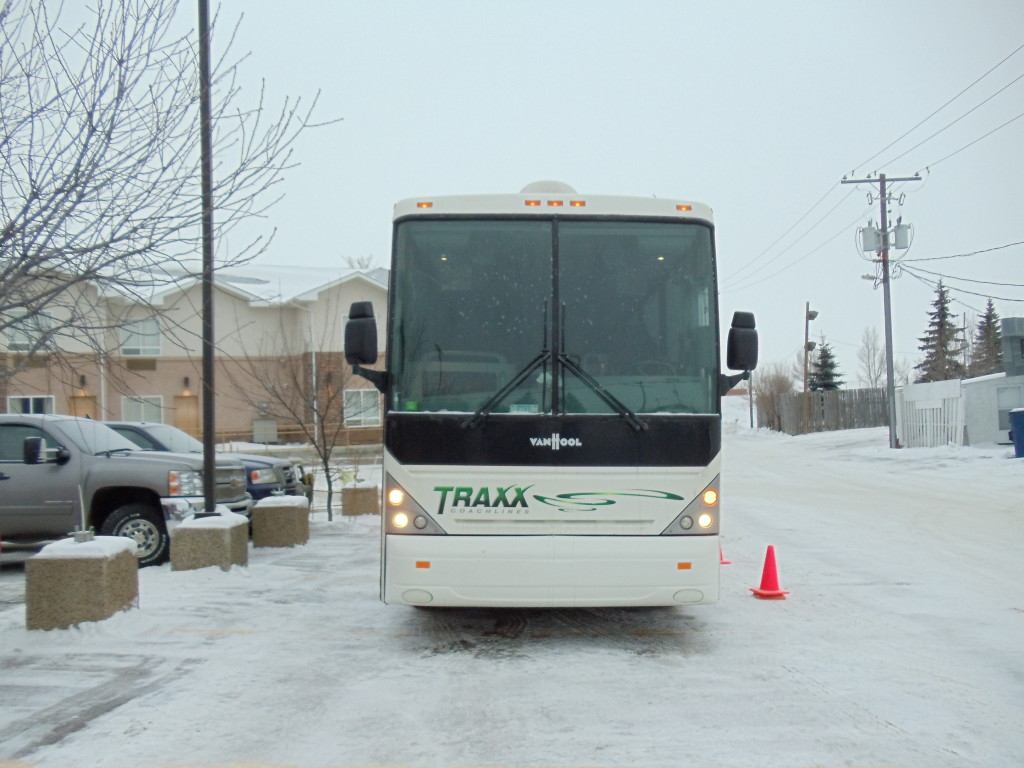 85% of Sunday was a day off in Regina, though the players were bused to the Brandt Centre in the morning to stretch and for some meetings.  I used the time to organize photos and load them onto our website, which after many hiccups early on with the transition to the league-wide network is much more functional and fully providing the multimedia options (photo galleries, video page, and high resolution visuals) it is capable of.  Through EverettSilvertips.com’s constant updates and the overall layout, we are all very happy of the layout and functionality of the new site.  The U.S. Division sets a very high bar in website maintenance and upkeep.  If there are any suggestions, requests, or ideas you have for our site, please send them my way – email me at jonr@everettsilvertips.com.

The team had lunch at Western Pizza today, a Chicago-style deep dish pizza joint that is popular amongst teams traveling through Regina.   Our bus driver, Z, gave the players a bit of a tease on the way to lunch when he pulled into an Earl’s Restaurant to turn around – Earl’s being a very popular place to eat on roadtrips due to the great food and waitresses that – how should I say this – have endeared themselves to its patrons as well as our players.  There was an audible groan amongst the guys when Z completed the maneuver and pulled out of Earl’s, though no one was complaining at Western Pizza when NFL football (and the 2010 Canada Cup of Curling!) was broadcast on one of their dozen or so high-definition TV screens.

The week’s travel had caught up with me by the time we made it back to the hotel, and I fell asleep face down on my bed with the TV and lights on for a full two hours.  I awoke disoriented and eventually made it downstairs to catch the bus for an early dinner at Luigi’s, where our team was provided a banquet of pot roast, potatoes, corn, Caesar salad, fresh baked dinner rolls and some delicious iced tea.  Is iced tea sweeter in Canada?  It certainly seems so.

Times have changed in the rugged WHL.  The hotels and buses are better equipped with DVDs, satellite TV and internet, the game presentations are top notch, players are provided with the most modern equipment, track suits, garment bags and suitcases, and video/computer technology allows coaches to have a firm grasp on reviewing gameplay.  Also, the pranks have apparently evolved, to which we can thank the influence of Brennan Yadlowski.  Shoe Checks?  Those are so 2008.  It’s much too pedestrian to drop a dollop of butter or ranch dressing on an unsuspecting player’s shoes as the team clinks its glasses in unison to commemorate the completion of the prank.  Now, the glass-clinking is followed by Yadlowski’s proclaiming of “Salty pockets!  Whose pockets are salty?  We have some salty pockets!”  At that point, everyone checks their jacket pockets for heaps of salt.  I won’t reveal who the victim was this time – I’ll just say that broadcasters are not immune from this prank.

After dinner, we bused back across town to catch the Denzel Washington flick Unstoppable.  It received positive reviews from the team, with all the guys appreciative that they’re looked after on non gamedays while on the road.  Andy Desautels, the Silvertips goaltending prospect who will be representing Team West at the upcoming World U-17s, joined us for dinner and the movie.  Dezzy, as he’s known by his teammates (can’t we get back to hockey nicknames that don’t end in –y or –ie, like Jibbs?), does not look or act like a 16-year old; at about 6’3 or 6’4 and sporting a burgeoning moustache above his upper lip, he gives off the appearance and confidence of a WHL veteran, and judging from his play with the Regina Pat Canadians this season, he’s been playing like one as well.  He’ll practice and eat meals with the team while the team is in town, and I look forward to interviewing him prior to our game on Tuesday at the Brandt Centre.

In lieu of a quote of the day, I’m going to leave you with several quotes from forward Tyler Giebel, a thoughtful and well-spoken forward who does a great job putting into words what it’s like growing up in this part of North America.

What is it about Saskatchewan that you hold dearly?

Mostly it’s about where I grew up – I grew up playing in the ponds , the fields, and the prairies, and I love that.  Just driving and not seeing mountains is a big difference between Saskatchewan and Everett, and seeing those grain silos and elevators really reminds me of home.  I got a different feeling once we crossed the border into Saskatchewan.  This is home to me, and I’m excited.

What is it about the bond amongst players from Saskatchewan?

It’s that we all grew up in something different than big city life.  You could definitely call it a bond – all the guys from Saskatchewan are close.

Balgonie is just one small town outside of Regina.  You don’t really hear about it much – or ever really at all.  It’s just a small quiet town that s staring to produce a lot of good hockey players in this league, like Logan Pyett and Jason Bast.

Did you grow up a Regina Pats fan?

Absolutely.  I’ve had season tickets with my grampa ever since I was a little guy.  I would go to every single game with him.  Matt Hubbauer, Rick Rypien and Barrett Jackman were some of my favorite players growing up.  And of course Jordan Eberle was great – I used to love going to games to watch him.  Josh Harding as well.

How did you spend your time returning home to Regina?

The Regina Pat Canadiens had a game – I went into the dressing room and it was great to see all the guys and my close friends back there.  It was actually weird to not see my name in a stall there.  But going back in there, it had seemed like I was just in there the other day.

Thanks again for checking out Road Tips!  Remember to check back in Monday night.  Eastern Swing Photo Gallery