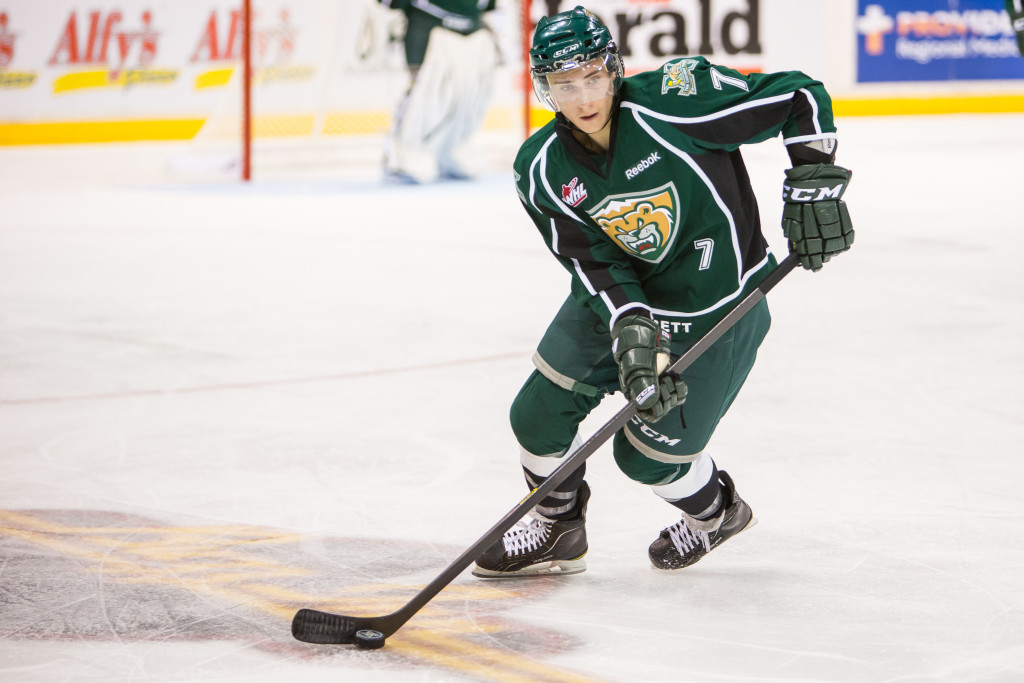 PORTLAND, OR – The Everett Silvertips saw a three-game road winning streak come to an end in a 5-2 loss in their first meeting with the Portland Winterhawks Wednesday night at Memorial Coliseum.  The Silvertips will play three more divisional road games before returning home to face Red Deer next Wednesday.

Ty Mappin scored his first career WHL goal in the contest, with Kohl Bauml registering the other Everett tally.  Austin Lotz stopped 40 shots in net to keep the Silvertips within striking distance for most of the night despite a 45-24 shot advantage for Portland.  Playing with a shorthanded lineup of only 18 players and minus the services of five veterans, the Silvertips scored first before surrendering four goals in the second period.

Portland came out firing with 15 first period shots, but Austin Lotz made a number of quality saves to keep the ‘Hawks off the board.  Everett then grabbed the game’s first goal at 8:41 as Mirco Mueller’s slapshot from the point was stopped by Brendan Burke, but Kohl Bauml swooped in to pick up the rebound and deposit it on his backhand to give the ‘Tips a 1-0 lead after one.

Portland tied it early in the second period as Chase De Leo put a wrist shot into the top corner from the high slot to make it 1-1 at 3:38.  The Winterhawks then took a 3-1 lead with two goals in 49 seconds midway through the period, first from Brendan Leipsic off the rush and then Oliver Bjorkstrand on a centering feed in front of the net.  Seth Jones tacked on another goal at 13:12 to give the ‘Hawks a 4-1 edge.  Everett answered back just over one minute later however as Ty Mappin skated alone into the low slot and beat Burke for his first career WHL goal, putting the deficit at 4-2 after two periods.

The ‘Tips managed nine shots and a few close calls in the third period, but couldn’t close the gap before Ty Rattie added a final marker to provide the 5-2 winning margin for Portland.  The Silvertips held the Winterhawks scoreless on all four of their powerplay attempts while finishing 0 for 1 on their own man-advantage.  Brendan Burke made 22 saves for the ‘Hawks to earn the win in goal.

Next up for Everett is another U.S. Division road game Friday in Kennewick against the Tri-City Americans.  Opening faceoff is set for 7:05 pm, with pregame radio coverage from the Toyota Center starting at 6:30 on Fox Sports 1380 AM.  The Silvertips will then head to Spokane for a pair of games against the Chiefs on Saturday and Tuesday before returning home to face the Red Deer Rebels Wednesday at Comcast Arena.