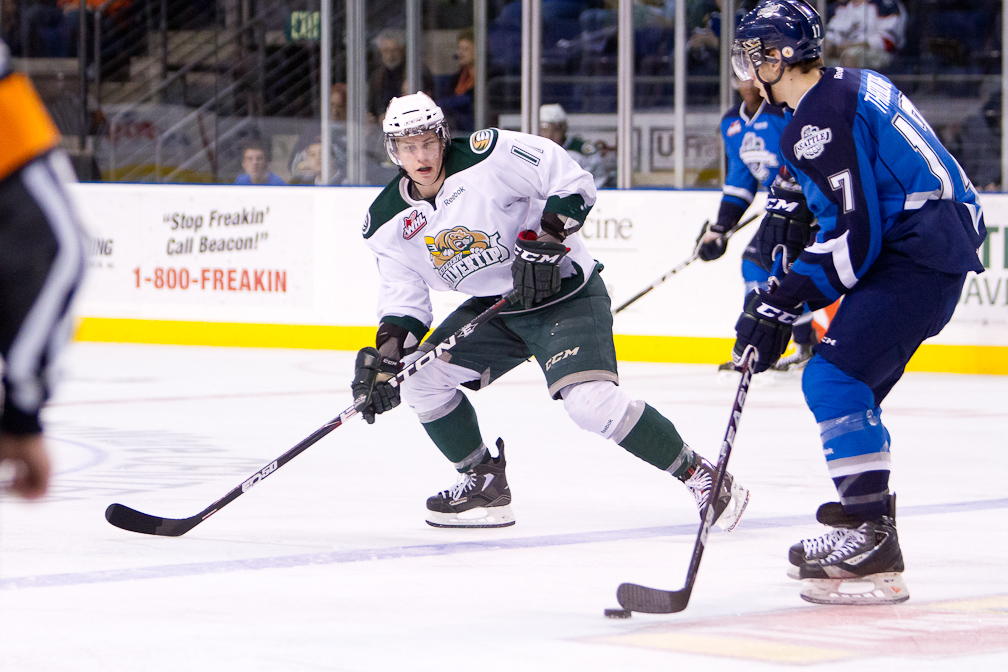 AMERICANS TOPPLE CHIEFS – Patrick Holland scored twice and set up two more as the visiting Tri-City Americans skated to a 7-3 win over the Spokane Chiefs in Western Hockey League action on Saturday night.

Justin Feser also scored twice and Brendan Shinnimin picked up a goal and three assists for the Americans (43-15-1-2), who move back into a tie with the idle Portland Winterhawks for first place in the U.S. Division.  Adam Hughesman – with a goal and an assist -0 and Zach Yuen also scored while Ty Rimmer made 36 saves to pick up win No. 25 on the season.

Dominik Uher scored and set up two more while Mitch Holmberg and Blake Gal also scored for the Chiefs (32-22-4-3), who were scoreless on five power play chances in the contest as they lose for the sixth time in their last seven games.  Eric Williams and Mac Engel combined for 23 saves in the loss.

Robin Soudek scored a pair of goals to pace the visiting Victoria Royals to a 5-3 win over the Prince George Cougars on Saturday night.

Zane Jones and Steven Hodges each tallied a goal and an assist while Brandon Magee added his 21st of the season for the Royals (20-36-2-4), who sweep their two-game weekend set in Prince George and move five points clear for a playoff spot in the Western Conference.  Jared Rathjen made 30 saves to pick up his second straight win.

Troy Bourke, Daulton Siwak and Chase Witala scored for the Cougars (19-40-0-2), who suffer their fourth straight loss and fall four points back for eighth place in the Western Conference.  Drew Owsley made 37 saves in the loss.

Brendan Gallagher scored twice and Riley Kieser picked up three assists to lift the visiting Vancouver Giants to a 5-3 win over the Kamloops Blazers on Saturday.

Jackson Houck, Brett Kulak and Marek Tvrdon also scored for the Giants (36-23-1-3), who overturned a 3-1 deficit to earn the split in their weekend home-and-home series versus Kamloops and keep their slim division title hopes alive.  Adam Morrison made 18 saves in the win.

Brendan Ranford scored twice and set up another for the Blazers (43-15-1-3), who led 3-1 until the 13:16 mark when the Giants began their comeback.  Cole Cheveldave made 26 saves in the setback.

Hunter Shinkaruk picked up two assists and scored the shootout winner in his return to the lineup to lead the Medicine Hat Tigers to a 4-3 victory over the visiting Kelowna Rockets on Saturday.

Dylan Bredo, Emerson Etem – with his 53rd of the season – and Trevor Cox scored in regulation for the Tigers (37-21-2-3), who pad their lead to three points over the Calgary Hitmen for third place in the Eastern Conference.  Kenny Cameron turned in a 35-save effort in regulation and wasn;t beaten in the shootout to post his third win of the season.

Brett Bulmer tallied two goals and an assist and Myles Bell scored his 13th of the season for the Rockets (26-28-3-6), who suffer their second straight setback.  Adam Brown made 36 saves in regulation play, but was beaten twice in the shootout to absorb the loss.

Calvin Pickard stopped all 29 shots he faced to post his fifth shutout of the season as the Seattle Thunderbirds blanked the visiting Everett Silvertips 3-0 on Saturday.

Dillon Wagner, Connor Honey and Jacob Doty scored and Brad Deagle chipped in two assist for the Thunderbirds (21-37-1-1), who open up a three-point lead over the ‘Tips for eighth place in the Western Conference.

Kent Simpson turned in a 42-save performance in a losing cause for the Silvertips (16-36-1-8), who see their losing skid hit four games.

Mark Stone scored the only goal in a shootout to lead the Brandon Wheat Kings to a 2-1 triumph over the visiting Regina Pats on Saturday.

Paul Ciarelli scored the only goal in regulation play for the Wheat Kings (34-26-1-3), who pick up their sixth win in seven games and remain 10 points in the clear for the eighth and final playoff spot in the Eastern Conference.  Corbin Boes turned aside 23 of 24 shots in regulation and wasn’t beaten in the shootout to claim his fourth straight victory.

Jack Rodewald scored the only goal for the Pats (33-23-5-2), who see a three-game win streak snapped and now sit just one point up on the Wheat Kings for seventh place in the conference.  Matt Hewitt made 30 saves in regulation but was beaten once in the shootout to take the loss.

Alex Petrovic scored the winner in a shootout to give the visiting Red Deer Rebels a 4-3 victory over the Saskatoon Blades on Saturday.

John Persson scored twice, including the tying goal 18:45 into the third period, and Brooks Maxwell also scored for the Rebels (28-27-1-5), who were scoreless on six power play chances in the win.  Deven Dubyk made 32 saves in regulation play and wasn’t beaten in the shootout to record his 13th win of the season.

Dalton Thrower and Jake Trask each tallied a goal and an assist and Brent Benson also scored for the Blades (36-25-0-2), who close to within one point of Calgary for fifth place in the conference with the point from the shootout loss.  Andrey Makarov turned in a 44-save effort in regulation but was beaten on one of three Rebels shootout chances to suffer the loss.

Sam Reinhart scored 19 seconds into overtime to lift the visiting Kootenay Ice to a 5-4 win over the Prince Albert Raiders on Saturday.

Max Reinhart scored twice and set up two more while Erik Benoit also scored two goals for the Ice (34-21-4-4), who tied the game at 4-4 on Max Reinhart’s second goal of the game on a penalty shot.  Nathan Lieuwen made 25 saves in earning his 25th win of the season.

Mark McNeill scored and set up two more while Antoine Corbin, Anthony Bardaro and Josh Morrissey also scored for the Raiders (20-37-3-2), who see a two-game winning streak come to an end.  Cole Holowenko made 34 saves in the overtime defeat.

Kenton Miller scored twice and James Henry tallied a goal and two assists to lead the Moose Jaw Warriors past the Swift Current Broncos 5-2 on Saturday.

Travis Brown and Carter Hansen also counted for the Warriors (38-17-5-2), who scored the game’s last four goals to put an end to a two-game losing skid.  Luke Siemens made 17 saves to record his 30th win of the season.

Coda Gordon had a goal and an assist and Richard Nedomlel also scored for the Broncos (23-33-2-6), who drop their third straight decision.  Jon Groenheyde made 43 saves in the loss.