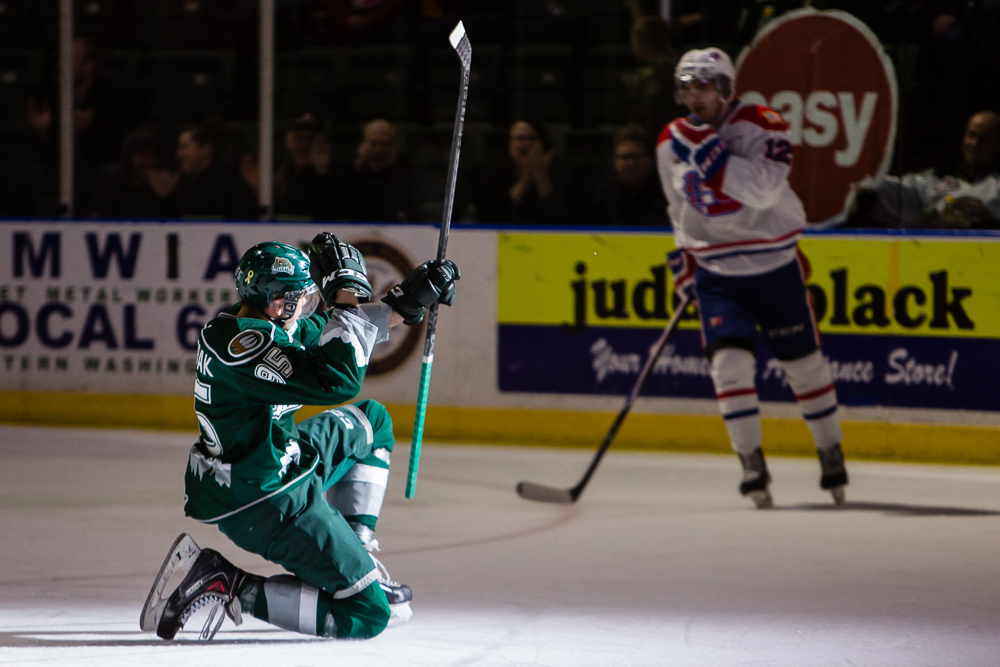 EVERETT – Nikita Scherbak led the way offensively with two goals and an assist to help lift the Everett Silvertips to a 4-2 victory over the Spokane Chiefs Wednesday night at XFINITY Arena.  The ‘Tips are now 2-1-1-0 against the Chiefs this season and stretched their U.S. Division lead back to five points with the win.

Scherbak had a hand in each of Everett’s last three goals, earning him first star of the game with his 11th multi-point game of the season.  Fellow Russian Ivan Nikolishin tallied a goal and assist in the game and ranks second in team scoring with 27 points.  Kohl Bauml scored his seventh goal of the season, while defenseman Kevin Davis picked up two assists. Goaltender Austin Lotz (13-4-1-1) turned away 31 of 33 shots faced to earn third star honors.

In uncharacteristic play, the Silvertips took two minor penalties in the first 20 minutes.  Spokane took advantage of its first opportunity with Adam Helewka scoring a powerplay goal midway through the frame.  After outshooting the Chiefs 8-5 in the first 10 minutes, the period ended with shots tied at 13 and the Chiefs holding a 1-0 lead.

Everett broke through offensively by outscoring Spokane 3-0 in the second period.  Just over a minute into the frame, Ivan Nikolishin took a pass from Kevin Davis and sent the puck to the top corner to tie the game at one.  Later in the period, Noah Juulsen fed Nikita Scherbak up the boards for a breakaway goal to give Everett its first lead of the game.  The Silvertips then took a 3-1 lead after a Kohl Bauml finished a give-and-go passing sequence with Scherbak to end the second period.  Shots were 25-20 for the Chiefs after 40 minutes of play.

The Chiefs got one back in the third after a shot by Dominic Zwerger ricocheted off a skate in front and behind Austin Lotz.  With the Silvertips holding a 3-2 lead late in the period, they received their first powerplay of the game.  Kevin Davis made a diving play to poke the puck away from Adam Helewka on a shorthanded breakaway and then made a pass to Scherbak, who beat two Spokane defenders before tucking in a backhand shot for a highlight-reel goal that gave Everett a two-goal lead.  The Chiefs pulled their goaltender in the final minutes, but the Silvertips held their lead for a 4-2 victory.

Spokane goaltender Tyson Verheist (5-2-0-0) stopped 21 of 25 shots faced in 58 minutes in net.  The Silvertips scored on their only powerplay opportunity, while Spokane went 1 for 2 on the man-advantage.  Final shots were 33-25 for Spokane after 60 minutes.

The ‘Tips are set to conclude a five-game homestand Friday night at 7:35 pm versus the Central Division-leading Medicine Hat Tigers.  Join us early for Hockey Happy Hour prior to Friday’s game at XFINITY Arena.