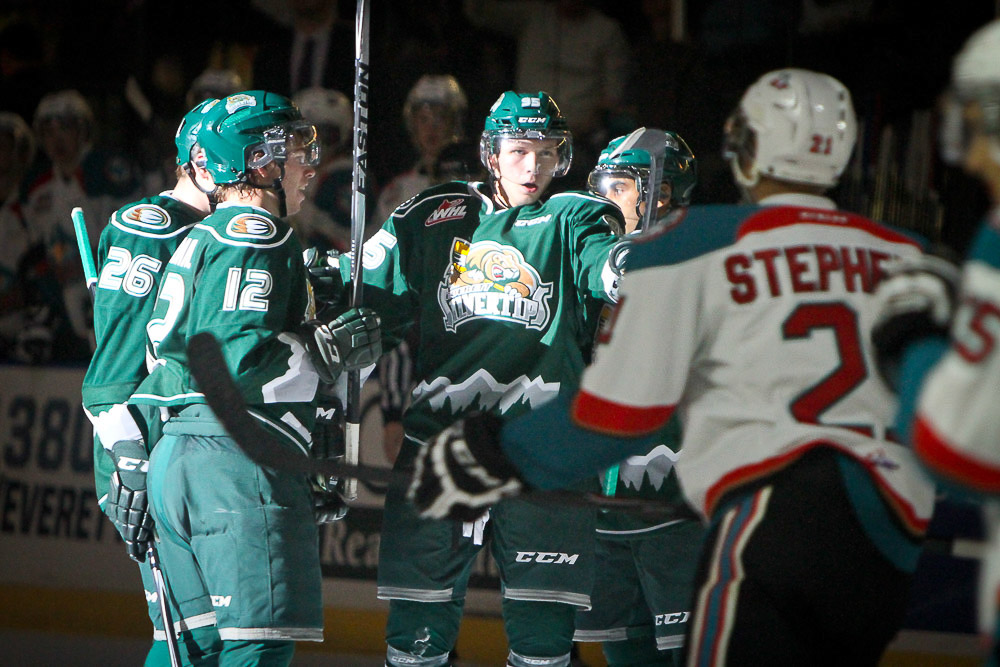 EVERETT – The Everett Silvertips came from behind twice and Nikita Scherbak had a three-point night in his debut with the club as the ‘Tips fell 5-4 in overtime to the Kelowna Rockets in their 2014-15 home opener Friday night at XFINITY Arena.  The ‘Tips gained one point by getting to extra time despite suffering their first loss of the year to stand at 3-0-1-0 heading into Saturday’s matchup against the Portland Winterhawks on home ice.

Just days after arriving in Everett from his time with the Montreal Canadiens, newly-acquired forward Nikita Scherbak scored two goals and added an assist as the ‘Tips battled back from 2-0 and 4-3 deficits in the game.  Defenseman Cole MacDonald recorded a goal and assist and Kevin Davis chipped in with two helpers, while Remi Laurencelle picked up his first goal of the season on a penalty shot.  Goaltender Austin Lotz (2-0-1-0) stopped 28 of 33 shots in net for Everett.

A fairly even first period saw action on both ends of the ice.  The game remained scoreless until Kelowna’s Riley Stadel made a backhand pass to the far side of the net for Tyson Baillie, who redirected it in less than three minutes before intermission.  The Rockets were back on the attack late in the period with Austin Lotz down in the crease, but the Everett goaltender made a fantastic blocker-hand save to keep the Silvertips down just one.  Shots were 14-12 for the Rockets after the first 20 minutes of play.

Tyson Baillie capitalized on a 5-on-3 powerplay for his second goal of the night as Kelowna took a 2-0 lead in the second.  The Silvertips got on the board with a powerplay goal of their own late in the period as Nikita Scherbak wired a perfectly-placed wrist shot over the shoulder of goaltender Jackson Whistle from just inside the faceoff circle.  Remi Laurencelle was hauled down on a breakaway and awarded a penalty shot just 10 seconds later, sending his shot off the post and in to quickly tie the game at two.   After two periods of play Everett edged Kelowna 21-20 on the shot clock.

The ‘Tips took their first lead during a 4-on-4 situation early in the third when Kevin Davis jumped into the offensive action along with Cole MacDonald, helping create a play that ended with Kohl Bauml centering to Scherbak for a one-timer in the slot that beat Whistle through the five-hole to make it 3-2 Everett.  The Rockets tied the game at three as Austin Glover knocked in a rebound and then regained the lead minutes later when Nick Merkley snuck a wrist shot off Lotz.  Back on the powerplay just over two minutes later, Cole MacDonald fired a shot from the blueline that was deflected in to tie the game once again at four.

It took only 24 seconds in overtime for Kelowna to snatch the victory as Cole Linaker drove the net from the right boards and snuck a quick wrap-around shot past Lotz to give Kelowna a 5-4 victory.  Final shots were 33-28 for the Rockets.  Goaltender Jackson Whistle (5-0-0-0) turned away 24 of 28 shots in net for Kelowna.  Everett was 2 for 5 on the powerplay, while Kelowna finished 1 for 5.

The Silvertips are right back on home ice for the second straight day Saturday night as the Portland Winterhawks come to town for a 7:05 pm opening faceoff.  Saturday’s game is the third meeting in eight days for the two division rivals after Everett’s sweep of a back-to-back set last weekend in Portland.