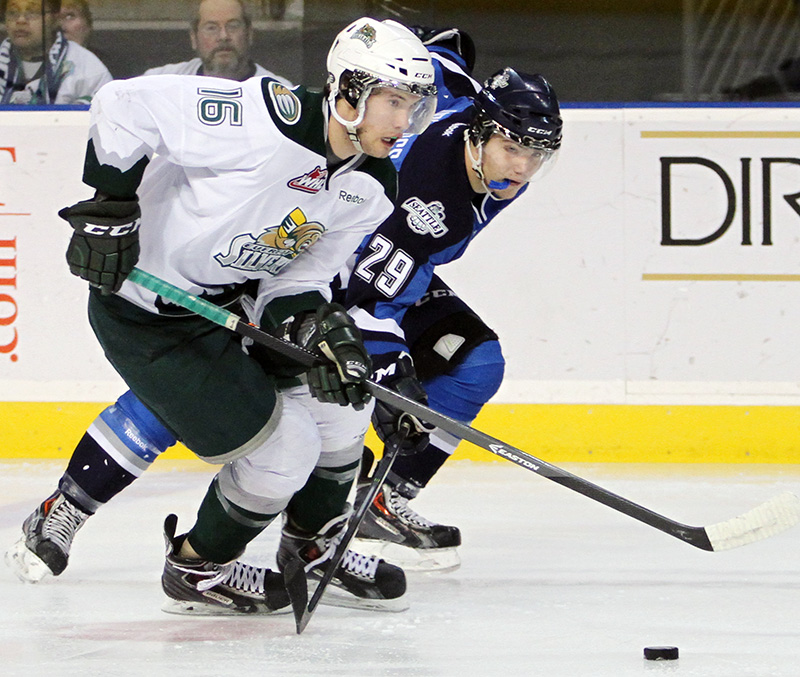 KENT – The Everett Silvertips erased a two-goal deficit to take a third-period lead before the Seattle Thunderbirds eventually took a 4-3 overtime victory Saturday night at the ShoWare Center.  The Silvertips will look to get back on the winning track when they return home to host the visiting Portland Winterhawks Sunday afternoon for their third game in three days.

Josh Winquist scored his 30th goal of the season in the contest and had an assist, while Manraj Hayer also finished with one and one.  Jujhar Khaira scored the other Everett goal.  Defenseman Carter Cochrane recorded an assist in his WHL debut for the Silvertips, who played the game with five defensemen as Matt Pufahl, Ben Betker and Noah Juulsen were all unavailable.  All four Seattle goals game on the powerplay, including the winner with 4 seconds remaining in a 4-on-3 overtime advantage.

A spirited first period featured two fights and one Seattle powerplay, but no goals as the Thunderbirds held a 9-8 edge in shots through the first 20 minutes.  The T-Birds began the second frame on their second powerplay and scored the first goal 24 seconds in as Cole MacDonald’s clearing attempt took a bad bounce off a stanchion in the glass and right across to the slot to Shea Theodore, who fired a wrist shot to the far right corner.  Seattle made it 2-0 on another powerplay at 7:56 when a shot from Ryan Gropp was tipped in by Matthew Barzal in front.

The Silvertips responded with a powerplay goal of their own near the midway point of the second as Josh Winquist one-timed a Mirco Mueller pass by goaltender Taran Kozun from the atop the right circle for his 30th of the year.  The ‘Tips tied the game less than three minutes later as Carter Cochrane’s breakout pass led to a nice give-and-go between Dawson Leedahl and Jujhar Khaira, who slipped around the defense and drove across the goal mouth to backhanded the puck in.  Winquist was awarded a penalty shot later in the period after being taken down on a breakaway, but Kozun didn’t bite on a deke in front and forced his attempt wide. Shots were even at 21 and the game was even at 2-2 heading into the third period.

Everett took its first lead of the game just over halfway through the third after Cochrane rushed the puck into Seattle ice and helped set up Winquist’s pass out of the corner to Manraj Hayer, who quickly rifled in a shot from the low slot to make it 3-2.  The lead wouldn’t last long however, with the T-Birds recording their third powerplay goal off a scramble in front when the loose puck was deposited by Ryan Gropp at 14:19.

The Silvertips were awarded a powerplay late in the third, but took a penalty of their own with nine seconds left in regulation to put them shorthanded early in overtime.  Just as Everett was moments away from killing off the penalty, Roberts Lipsbergs snuck a hard shot past Cotton from a sharp angle to give Seattle the 4-3 overtime win.  Final shots were 35-28 in favor of the T-Birds.

The Silvertips return home for their third game in three days Sunday afternoon as they host another divisional matchup with the Portland Winterhawks at 4:05 pm at Comcast Arena.  The ‘Tips will then travel to Portland Wednesday to face the ‘Hawks again before hosting back-to-back home games against Seattle and Spokane this upcoming Friday and Saturday.