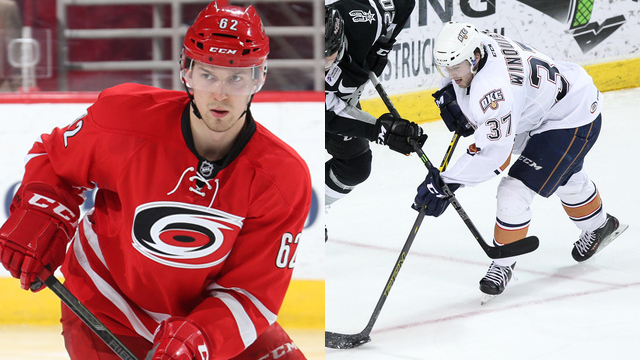 National Hockey League
Rasmus Rissanen (2009-11) – Carolina Hurricanes
The most recent Silvertips alumnus to make his NHL debut, defenseman Rasmus Rissanen signed a new one-year contract with the Carolina Hurricanes at the start of the NHL free agency period on July 1.  The two-way deal could find Rissanen skating with the Hurricanes or their AHL affiliate, the Charlotte Checkers, where he has spent most of his four-year pro career.  The 24-year-old Kuopio, Finland native made his NHL debut on March 6 and played six games with the Hurricanes before an injury ended his first stint with the big club.  He also skated in 52 games for the Checkers last season, totaling 11 points (1g/10a) and 69 penalty minutes in that time.

American Hockey League
Shane Harper (2005-10) – Florida Panthers/Portland Pirates
Longtime Silvertips great Shane Harper has become a proven contributor over five years at the American Hockey League level, enjoying his best season to date last year with the Chicago Wolves.  Harper finished third in the entire AHL with 32 goals and led the Wolves in scoring with 50 points in 75 games.  That production has earned him another opportunity to chase his dream of making the NHL in the form of a new two-way contract with the Florida Panthers and their AHL affiliate, the Portland Pirates (based in Portland, Maine).  The Valencia, California native has played 344 pro games since signing an NHL contract with the Philadelphia Flyers during his 20-year-old season in Everett, but has yet to make his NHL debut.

Josh Winquist (2009-14) – Bakersfield Condors
For a player who never found his name on the NHL Draft radar, Josh Winquist continues to earn opportunities for himself at the professional level.  After a record-breaking overage season with the ‘Tips in 2013-14, Winquist spent last year working his way up from the ECHL to the AHL and has now signed a fresh AHL deal with the Bakersfield Condors – the new top affiliate of his hometown Edmonton Oilers.  As a rookie in the Edmonton minor-league system last season, Winquist was the ECHL’s rookie scoring leader with 23 points (5g/18a) in 18 games when he was called up from the Condors (then in the ECHL) to the Oklahoma City Barons (the Oilers’ former AHL affiliate).  He went on to play 46 AHL games for the Barons, scoring eight goals and totaling 19 points along with a +7 rating.  He chipped in four more points (2g/2a) in ten playoff games and will be back in California for the debut of AHL hockey in Bakersfield next season.

European Pro Hockey
Karel Hromas (2004-06) – Morzine-Avoriaz-Les Gets Penguins (France, Ligue Magnus)
Czech native Karel Hromas is preparing for the tenth season of his European professional career in 2015-16 after re-signing in the top French league with the Morzine-Avoriaz-Les Gets Penguins.  He scored six goals and assisted on eight others in 22 games last season for the Penguins, who fell in the first round of the Ligue Magnus playoffs.  A fourth-round pick of the Chicago Blackhawks in the 2004 NHL Draft, Hromas spent two North American seasons with the Silvertips as part of a junior career that included two trips to the IIHF World Junior Championship.  He posted 51 points (29g/22a) in 117 games with Everett through the 2005-06 season before returning to his native Czech Republic to spend his first eight pro seasons with HC Sparta Praha and KLH Chomutov.

Ryan Harrison (2010-13) – Olofström IK (Sweden, Division 2)
After his graduation from Everett in 2013, Kelowna, BC native Ryan Harrison opted to use his WHL Scholarship to attend the University of Calgary and play for the Dinos.  Harrison has played the last two seasons for U of C, but will now try his hand in the professional ranks overseas after signing with Olofström IK of the Swedish second league.  He debuted with a 23-point freshman campaign to rank among the top scorers on the team before posting 17 points (3g/14a) in 23 games as a sophomore last season.  Harrison helped the Dinos to a second-place finish in the Canada West Conference and an appearance in the CIS University Cup championship tournament. Good luck to Ryan as he starts his pro career in Sweden!