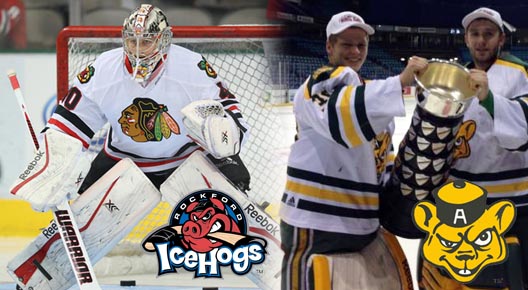 EVERETT – It’s the playoff time of year around the hockey world, with the stakes getting continually higher for some teams and others wishing they were still part of the excitement on the ice.  Either way, it’s a great time to resume checking in on some of your favorite former Silvertips players and their exploits during the 2013-14 season.  Check back in the coming weeks as we continue to track the pro careers of many other Silvertips alumni!

– Radko Gudas (2009-10), Tampa Bay Lightning
Hard-hitting defenseman Radko Gudas and the Tampa Bay Lightning earned home ice advantage in their first-round Atlantic Division matchup with Montreal, but were forced to play without injured starting goaltender Ben Bishop and were subsequently swept in four games by the Canadiens.  Gudas missed Game 4 with an injury, but still totaled 16 hits, nine penalty minutes, four blocked shots and one assist in three playoff games for Tampa Bay.  Despite the early playoff exit, Gudas enjoyed a successful first full season with the Lightning.  The Czech native skated in 73 regular season games, totaling 22 points (3g/19a) and a +2 plus/minus rating while tying for third in the league with 273 hits and sixth with 152 penalty minutes.

– Ryan Murray (2009-13), Columbus Blue Jackets
Defenseman and longtime Silvertips captain Ryan Murray has already begun to live up to the high expectations placed upon him as the #2 overall pick in the 2012 NHL Draft; something that won’t surprise those who watched him play in Everett.  By the second half of his rookie season, Murray was already logging significant minutes and getting powerplay time on his way to 21 points (4g/17a) and a +4 rating in 66 games with the Blue Jackets.  The White City, Saskatchewan native rebounded from a month-long injury absence late in the year to return in time for the playoffs, where he is averaging over 25 minutes per game and has one assist in Columbus’ thrilling first-round series vs. Pittsburgh.  All three games have been decided by one goal, with the Jackets earning their first-ever playoff win in Game 2 and trailing the series 1-2 going into Game 4 on Wednesday.

– Chris Langkow (2009-10), Bridgeport Sound Tigers
Fourth-year pro forward Chris Langkow played in a handful of AHL games in 2010-11 and 2011-12 while skating mostly in the ECHL (where he won a Championship in 2011), but this year the Vegreville, Alberta product’s hard work resulted in a call-up to the AHL’s Bridgeport Sound Tigers that lasted nearly the entire season.  After recording nine points (2g/7a) in 11 ECHL games with the South Carolina Stingrays to start the year, Langkow was recalled by Bridgeport in mid-November and never looked back.  He skated in 64 games for the Sound Tigers, totaling 20 points on five goals and 15 assists along with 24 penalty minutes and 60 shots on goal.

– Kent Simpson (2008-12), Rockford IceHogs
In his second pro season in 2013-14, longtime Silvertips goaltender Kent Simpson was an AHL regular who also made his National Hockey League debut for the Chicago Blackhawks.  Simpson played 31 games and was Rockford’s #1 goalie for much of the year, compiling a record of 11-14-1 with a 3.64 goals-against average and an .891 saves percentage as the IceHogs missed out on a Western Conference playoff spot by only four points.  The Edmonton, Alberta native earned his first NHL call-up to the Blackhawks in December, spending ten days with Chicago and appearing in his first NHL game on December 14 as he relieved starter Antti Raanta in the third period of a 7-3 loss to the Toronto Maple Leafs at the Air Canada Centre.

– Byron Froese (2008-10), Cincinnati Cyclones
Forward Byron Froese, who split time between the AHL’s Rockford IceHogs and Cincinnati in the ECHL this season, is coming off a huge effort in Game 2 of the Cyclones’ first-round playoff series vs. Orlando.  Froese re-entered the lineup after missing Game 1 and quickly set a franchise playoff record with five points, including just the third hat trick in Cincinnati playoff history, to lead the Cyclones to a 7-3 win over the Solar Bears.  The ‘Clones are up 2-0 in the series with Game 3 set for Wednesday in Cincy.  Froese had five assists in 28 AHL games with Rockford before finishing his third pro season on a reassignment to the ECHL, where he was nearly a point-per-game player with 21 points (11g/10a) and a +7 rating in 25 regular season games with Cincinnati.

University of Alberta
– Zack Dailey (2005-10), Luke Siemens (2010-11), Brennan Yadlowski (2010-12)
Dailey, Siemens and Yadlowski were all part of the Alberta Golden Bears’ run to the 2014 CIS University Cup Championship this season.  U of A finished first in Canada West with a dominant 25-2-1 record and 51 points before knocking off the U. of British Columbia and U. of Calgary in the playoffs.  The Bears then won all three games in the CIS Championship tournament to take home their record 14th national title.  Siemens started 12 games in goal, going 11-1 with a 1.98 goals-against average and a .919 saves percentage. Former Everett captain Dailey had a goal and three points in five appearances, while Yadlowski also appeared in five games with two assists and a +2 rating.

Mark your calendars for our third-annual Silvertips Alumni Weekend, which is coming up later this summer on Friday, July 11 and Saturday, July 12.  Keep an eye out for more details to be released soon!