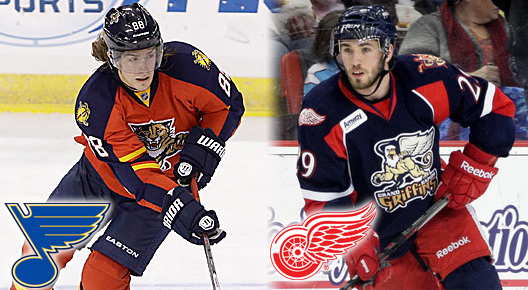 With the dawn of a new season just over the horizon, there’s plenty to report in our latest Silvertips Alumni Update.  Two former Silvertips have recently signed new NHL contracts, a few established professionals are on their way to new locales and two of last year’s overagers are taking their first steps toward new opportunities after the WHL.  So without further ado, here is our latest alumni report:

Peter Mueller (2005-07), St. Louis Blues
Former Silvertips great Peter Mueller, whose 297 career NHL games lead all Everett alumni, could be back in the league next season after a one-year stint overseas in Switzerland.  The Bloomington, Minnesota native signed a one-year contract with the St. Louis Blues last week as he looks to secure a return to the NHL.  The deal was a two-way agreement, meaning Mueller will spend next season with the Blues or their American Hockey League affiliate, the Chicago Wolves.  If he plays in Chicago, Mueller would join former Silvertip Shane Harper, who recently signed on for another year with the Wolves.

Landon Ferraro (2010-11), Detroit Red Wings
In the final season of his entry-level contract with Detroit, former ‘Tips Captain Landon Ferraro appeared in his first four NHL games with the Red Wings last season.  He spent the rest of the past three years with the Grand Rapids Griffins of the AHL, a run which was highlighted by a Calder Cup Championship in 2013.  Now Ferraro has recently re-signed with the Red Wings on a one-year, two-way contract.  The Burnaby, BC native will face stiff competition to earn a roster spot in the Motor City amongst a crowded pool of forwards, but would have to clear NHL waivers before being sent back to Grand Rapids for his fourth pro season.

Josh Winquist (2009-14), Oklahoma City Barons
Following a five-year junior career in Everett and a dazzling overage season in which he put his imprint on the Silvertips’ record book, Josh Winquist is getting his opportunity in the pro ranks.  Winquist played two games during a tryout with the AHL’s Oklahoma City Barons at the end of last season and has now earned himself an AHL contract with the Barons for 2014-15.  The Barons are the AHL affiliate of the Edmonton Oilers (Winquist’s hometown NHL club), who he will join for rookie training camp and the annual Youngstars Tournament hosted by the Vancouver Canucks in Penticton, BC next month.

CLICK HERE for an interview with Winquist, who was in Everett this week visiting & assisting with the Silvertips Youth Hockey Camp.

Leland Irving (2003-08), Avangard Omsk – Russia (KHL)
After his Calgary Flames contract expired following the 2012-13 season, Leland Irving ventured to Europe to join Finnish powerhouse Jokerit Helsinki last year.  Another characteristically strong season (2.14 GAA, .922 SV% and three shutouts in 55 games) earned him a contract in the Russian Kontinental Hockey League for the upcoming season.  Irving will tend goal for Avangard Omsk, the same club his former Everett teammate Ivan Baranka skated for last year.  There will be no reunion this season however, as Baranka has since signed with the KHL’s Slovan Bratislava franchise back in his native Slovakia.

Chad Bassen (2003-04), Iserlohn Roosters – Germany (DEL)
Inaugural year Silvertips forward Chad Bassen, who holds dual Canadian-German citizenship, is set to continue his lengthy and successful German Elite League (DEL) career during the 2014-15 season.  The 31-year-old Bassen has signed with the Iserlohn Roosters for his 11th pro season, all of which have been spent in DEL – one of the top pro leagues in Europe.  Bassen has skated for five other teams in that time, including three years each with the Frankfurt Lions and Straubing Tigers, two seasons with the Augsburger Panther and one each for the Hamburg Freezers and Grizzly Adams Wolfsburg (what a name!).

Manraj Hayer (2010-2014), University of British Columbia Thunderbirds
Manraj Hayer will be playing for the Thunderbirds next season (gasp) – but don’t worry, these Thunderbirds play in his hometown of Vancouver rather than down in Kent. After completing his junior eligibility last season following a four-year run with the Silvertips, Hayer has elected to activate his WHL scholarship and enroll at the University of British Columbia.  In addition to studying the Faculty of Arts at UBC, Hayer will play for the Thunderbirds hockey program alongside a host of other WHL alums – including former Everett teammate Scott MacDonald.

Chris Hartsburg (2009-2013), Head Coach – Lincoln Stars
Finally, congratulations are in order for former Silvertips Assistant Coach Chris Hartsburg, who got his first head coaching opportunity back in May when he was hired as the new bench boss of the USHL’s Lincoln Stars.  After four seasons as an Assistant Coach with the Silvertips, another with the OHL’s Erie Otters and a previous coaching stint with the minor-pro Colorado Eagles (Central Hockey League), Hartsburg is now preparing for his first training camp as a Head Coach.  The Stars open the USHL season on Sep. 26.