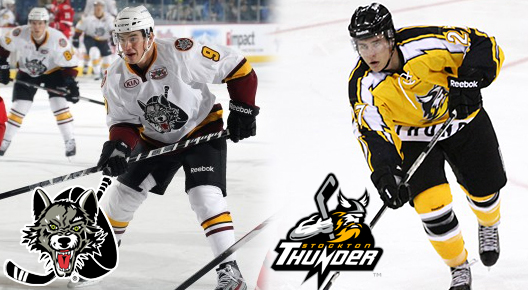 EVERETT – We’ve been overdue for another check-in on the hockey careers of some of your favorite former Silvertips players – so here is another edition of our Silvertips Alumni Update.  Our latest report covers one player’s career year with a new AHL club, another solid European season for an original Silvertip and a strong ECHL rookie campaign for a recent alum, among other players updates.  Check back in the coming weeks as we continue to track the pro careers of Silvertips alumni!

American Hockey League
Shane Harper (2005-10), Chicago Wolves
After spending his first three pro seasons in the Philadelphia Flyers organization with the AHL’s Adirondack Phantoms, longtime Silvertip and Valencia, California native Shane Harper inked a free-agent deal with the St. Louis-affiliated Chicago Wolves of the AHL (CLICK HERE for an article explaining how the great Sidney Crosby recommended Harper to Chicago).  Harper enjoyed a successful debut with his new club this year, finishing fifth on the team with a career-high 33 points (13g/20a) and fourth with a +19 plus/minus rating as the Wolves won the AHL’s Midwest Division crown with a 45-21-5-5 record.  Earning the #2 seed in the Western Conference playoffs, Chicago then defeated the Rochester Americans in the first round before being swept by the Toronto Marlies in the conference semifinals.  In the first playoff action of his pro career, Harper was Chicago’s fourth-leading scorer with five points (2g/3a) in nine games.

ECHL
Landon Oslanski (2012-13), Stockton Thunder
Following his overage season in Everett, Landon Oslanski opened the door to a pro career during a six-game amateur tryout with the ECHL’s Stockton Thunder at the end of last season.  The result was the Camrose, Alberta product signing on with the Thunder this year and finishing sixth among all ECHL rookie defensemen in scoring.  Oslanski’s 27 points on eight goals and 19 assists were second-most among Stockton D-men, while his +4 rating in 67 games was second best on the club overall.  Despite finishing seventh out of eight teams in the Western Conference, the Thunder shocked the Pacific Division champion Ontario Reign in a first-round playoff sweep.  Stockton then bowed out in a five-game second round series against the Bakersfield Condors.

Central Hockey League
Thomas Heemskerk (2009-11), Quad City Mallards
Former San Jose Sharks prospect Thomas Heemskerk played his third pro season in the Central Hockey League after two years in the ECHL with the occasional AHL call-up. The former Silvertip tended goal in 31 games for the Quad City Mallards this season, ranking fifth in the CHL with a 2.73 goals-against average, sixth with a .907 saves percentage and third with three shutouts on his way to a 15-9-5 record.  Heemskerk then anchored the 5th-seeded Mallards’ playoff run with six wins, including a first-round Game 7 victory over the Rapid City Rush.  The Chilliwack, BC native was unable to replicate that magic in another Game 7 however, as Quad City fell to the eventual league champion Allen Americans in round two.  Heemskerk has already signed to play overseas in Hungary next season with Miskolci Jegesmedvék (Miskolc Polar Bears).

European Pro Hockey
Ivan Baranka (2003-05), Avangard Omsk – Russia (KHL)
Veteran defenseman and original Silvertip Ivan Baranka had an eventful year, playing his ninth professional season in the Russian Kontinental Hockey League and competing for his native Slovakia in his second consecutive Olympic Winter Games in Sochi, Russia.  The Slovaks ended with a disappointing 0-4 record at the Olympics, but nearly scored a huge upset of the host country in a 1-0 shootout loss vs. Team Russia.  In 47 KHL games with Avangard Omsk this season, Baranka reached the 20-point plateau for the third time in the last five years with one goal and 19 assists while also compiling a +3 rating and 30 penalty minutes.  Although Avangard Omsk missed the KHL playoffs with the North American equivalent of a 23-25-6 record, they competed against the league’s other non-playoff teams for the Nadezhda Cup – winning three series to clinch the trophy over runner-up Dinamo Minsk.

John Lammers (2005-06), Klagenfurt AC – Austria
John Lammers and his Klagenfurt Athletiksport-Club teammates were looking to repeat as Erste Bank League Champions in 2014 after rolling through the 2013 playoffs with a 12-3 record to win Austria’s top professional league.  Despite finishing the year on a hot streak however, Klagenfurt finished seventh in the 12-team league to narrowly miss out on a playoff spot.  Lammers ranked third on the team in scoring this year with 34 points (14g/20a) in 43 games and also compiled a +10 rating in his eighth pro season.  After three years with Klagenfurt AC, the Langley, BC native and former Dallas Stars prospect will switch Austrian clubs to play for Villacher SV next season.

Canadian Collegiate Hockey
Cody Fowlie (2010-2012), University of Regina Cougars
Airdrie, Alberta product Cody Fowlie headed east to Saskatchewan this year to begin his collegiate career after three WHL seasons, two of which were spent with the Silvertips and another with the Kelowna Rockets.  Fowlie proved a good fit at the University of Regina, leading the team in scoring with 19 points (6g/13a) along with a +1 rating and 14 penalty minutes in 28 games.  The Cougars started the season strong with an 8-6 mark into November, but slumped late in the year with only three wins in their last 14 games.  At 11-15-2 for the season, the Cougars lost out on the sixth and final Canada West playoff spot due to a tiebreaker with the UBC Thunderbirds.

Visit everettsilvertips.com throughout the offseason for news and updates on team appearances, the WHL schedule release, NHL Draft and much more.  For more information, call the team office at 425-252-5100, “like” the Everett Silvertips Hockey Club on Facebook or follow @WHLSilvertips on Twitter.