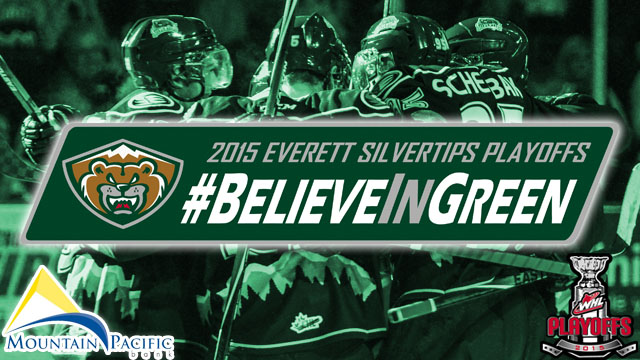 EVERETT – The Everett Silvertips today announced complete series schedules for both potential opponents in the first round of the 2015 WHL Playoffs, presented by Mountain Pacific Bank.  The Silvertips have home-ice advantage for their first round series and will face either the Spokane Chiefs or Seattle Thunderbirds.

The Silvertips are tied with the Portland Winterhawks for the U.S. Division lead entering the final weekend of the regular season, which finds both clubs playing three games in three days and concluding the regular season on Sunday.  Everett and Portland have both accumulated 90 points over 69 games, with the Winterhawks currently owning a tiebreaker edge by virtue of having one more victory.  The Silvertips will open the playoffs against the Spokane Chiefs if they win the U.S. Division title, while a second-place finish pits Everett against the Seattle Thunderbirds in the first round for a second consecutive season.

Regardless of opponent, Everett’s four potential home games in the first round remain the same.  The ‘Tips host Games 1 and 2 on Friday, March 27 and Saturday, March 28 at XFINITY Arena.  If necessary, Game 5 of the series is set for Saturday, April 4 and a decisive Game 7 would be played on Wednesday, April 8 in downtown Everett.

Single-game tickets for the Silvertips’ first two playoff games are on sale now and can be purchased in person at the XFINITY Arena Box Office, online at xfinityarenaeverett.com and by phone at 866-332-8499.  For more information on Silvertips playoff packages or any other inquiry about playoff tickets, CLICK HERE, call 425-252-5100 or stop by the team office on the north side of XFINITY Arena during regular business hours.

The Silvertips are in Victoria Friday before returning to XFINITY Arena Saturday to face the Royals again for the final home game of regular season at 7:05.  Puck drop is set for 7:05pm on Fan Appreciation night, which will feature numerous giveaways and a guaranteed $10,000 prize in the 50/50 raffle.  Everett concludes the regular season Sunday in Spokane.