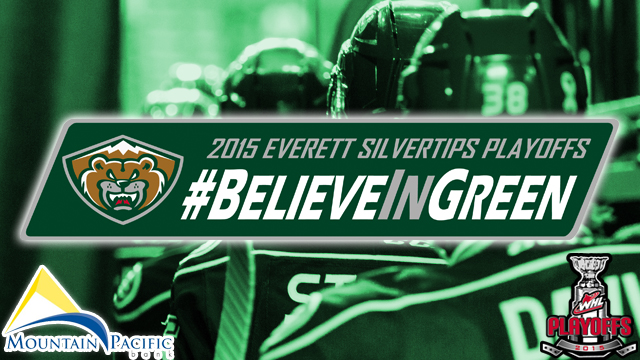 EVERETT – The Everett Silvertips today announced their first two games of the 2015 WHL Playoffs, presented by Mountain Pacific Bank.  With home-ice advantage already secured for their first round series, the Silvertips will host Game 1 on Friday, March 27 at 7:35 pm and Game 2 on Saturday, March 28 at 7:05 pm at XFINITY Arena.

The Silvertips lead the U.S. Division by two points over the Portland Winterhawks with five games remaining in the regular season and have clinched home ice in the first round of the playoffs for the first time since 2010.  Everett’s first round playoff opponent has not yet been determined, although the most likely scenarios would pit the ‘Tips against either the Spokane Chiefs or Seattle Thunderbirds.  The complete first-round series schedule will be announced once an opponent has been decided.

Single-game tickets for the Silvertips’ first two playoff games go on sale starting Saturday at noon and are available in person at the XFINITY Arena Box Office, online at xfinityarenaeverett.com and by phone at 866-332-8499.

For more information on Silvertips playoff packages or any other inquiry about playoff tickets, CLICK HERE, call 425-252-5100 or stop by the team office on the north side of XFINITY Arena during regular business hours (8:30 am to 5 pm, Monday-Friday).

The Silvertips are preparing for a home-and-home weekend set to close their season series with the rival Seattle Thunderbirds.  The ‘Tips are in Kent Friday at 7:35 pm for the first game, with pregame radio coverage starting at 7:00 on Fox Sports 1380 AM.  Everett will then host the Thunderbirds for the final time in the regular season Saturday night at 7:05 at XFINITY Arena.