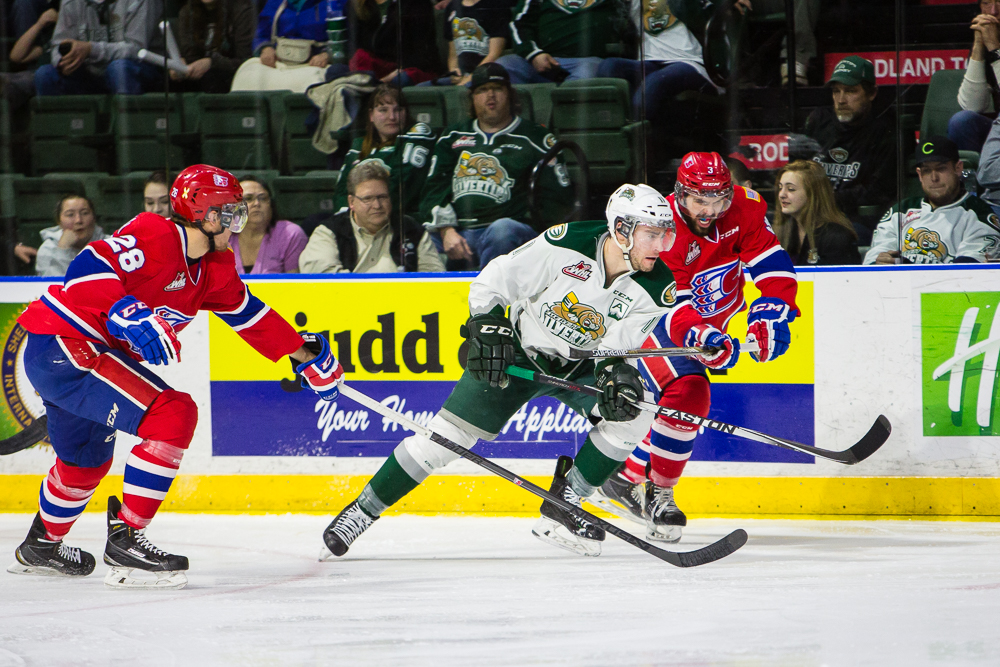 SPOKANE – Brayden Low scored at 3:43 of the third overtime period to give the Everett Silvertips a 2-1 victory in Game 6 against the Spokane Chiefs Tuesday night at Spokane Veterans Memorial Arena, clinching the first-round series four games to two for Everett.  It was the longest game in Silvertips history, besting the previous mark by nearly 16 minutes.

The Silvertips will now face the Portland Winterhawks in the second round of the WHL Playoffs.  The ‘Tips host Game 1 against the ‘Hawks Friday night at 7:35 pm at XFINITY Arena, with Game 2 following Saturday night at 7:05 in downtown Everett.

Low’s goal, his series-best fourth in as many games, ended the marathon after nearly 104 minutes of play – over four hours after the contest began.  Kohl Bauml netted the other Silvertips goal and Carter Hart (4-2) stopped 53 of 54 shots in goal to clinch Everett’s first series victory since 2007.  The win nearly came in regulation before Spokane tied the game at one with 5.4 seconds left in regulation.

Spokane started the game with two good scoring opportunities in the early minutes, but was unable to find the net.  The Silvertips went on top on the game’s first powerplay midway through the period when Ben Betker’s point shot led to a scramble in front, with Carson Stadnyk slipping a pass across the crease to Kohl Bauml for the finish and a 1-0 Everett lead. Chiefs goaltender Garret Hughson made sure the ‘Tips didn’t add to the lead, robbing Logan Aasman on a centering feed from Graham Millar and then stopping Bauml on a partial shorthanded breakaway.  Shots were 12-9 Spokane after one.

Carter Hart was forced to stop Liam Stewart during a 2-on-1 chance in the middle frame before Hughson answered with a sprawling glove save to prevent a Nikita Scherbak tally midway through the second.  Everett missed on two powerplay chances in the period and the score remained 1-0 Everett into the third.  Shots were 21-17 Spokane through 40 minutes.

Action picked up as the third period continued along, with the Silvertips missing on two late powerplay chances as Spokane built momentum in the final minutes.  With the Chiefs’ net empty in the final seconds of regulation, Spokane’s Adam Helewka won the puck off the boards and cut into the high slot to fire a shot that was deflected through Carter Hart’s five-hole by Kailer Yamamoto with 5.4 seconds on the clock.

The Chiefs outshot the ‘Tips 12-9 in the first overtime before Everett appeared to score the winning goal early in the second additional period.  Remi Laurencelle deflected a Lucas Skrumeda point shot into the net past Hughson at 1:11 of double overtime, but his stick was ruled to be above the crossbar and the goal was disallowed.  The ‘Tips went on to outshoot Spokane 5-4 in the second OT as the game continued.

Remi Laurencelle sent a puck deep in the Spokane zone early in the third overtime, with Brayden Low stealing a pass from Tamas Laday along the boards and skating across the goal mouth unopposed before tucking a backhand shot through Hughson’s legs to end the game and put the ‘Tips in the second round.

Garret Hughson (2-4) stopped 39 Everett shots as Spokane finished with a 54-41 shot advantage.  The Silvertips were 1 for 5 on the powerplay, while the Chiefs were 0 for 1.

The Silvertips will now have two days to prepare for Game 1 against the Winterhawks Friday night at 7:35 pm, with Game 2 following Saturday at 7:05.  Ticket packages for both games are available now, while single game seats go on sale Wednesday morning 10 am.