Silvertips Cool off Blazers in Kamloops 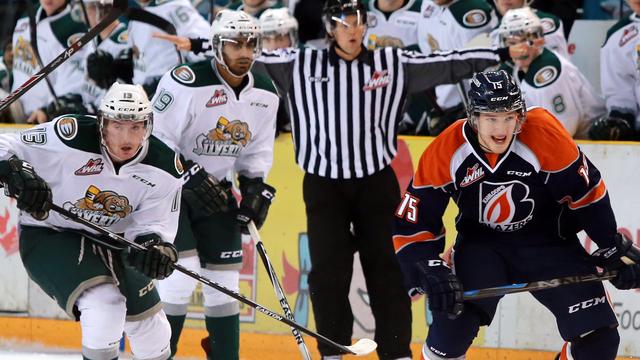 KAMLOOPS, BC – The Everett Silvertips improved to 4-0 away from home this season with a 5-1 victory over the Kamloops Blazers Saturday night at the Interior Savings Centre.  The victory moves the ‘Tips back into a tie for first place in the U.S. Division and keeps the club without a regulation loss for the year at 5-0-2-0.

Ivan Nikolishin enjoyed his second straight three-point outing with a goal and two assists, while Carson Stadnyk had a goal an assist.  Kamloops native Kevin Davis, Cole MacDonald and Kohl Bauml also scored goals and Nikita Scherbak, Noah Juulsen and Patrick Bajkov each drew two assists.  Austin Lotz (4-0-1-0)     was tested with 13 shots in the third period, but didn’t flinch in helping Everett to the win.

Everett found itself shorthanded three times in the first period and the Blazers capitalized on one of those powerplays as Brady Gaudet sent a hard shot over Austin Lotz’ left shoulder from the top of the circle at 8:12.  The ‘Tips countered off the rush when Carson Stadnyk delayed along the right boards and fed the puck to a trailing Kevin Davis, who slipped by a defender and beat Bolton Pouliot through the five-hole.  On a powerplay of their own two minutes later, the Silvertips went ahead 2-1 as Ivan Nikolishin cut across the high slot and rifled a wrist shot past the glove of Pouliot.

The second period saw few whistles and plenty of up-and-down the ice play, with neither team able to change the score as it stayed 2-1 into the third.  Cole MacDonald changed that 59 seconds into the final period however, placing a seeing-eye point shot into the top corner to make it a two-goal Silvertip lead.

Kamloops then began to pressure the ‘Tips, spending time in the Everett zone and getting shots to the net without successfully cutting into the deficit.  The Silvertips added to the lead with some stellar puck movement with less than three minutes remaining with Bajkov receiving a cross-ice saucer pass from Scherbak and then slipping the puck across to be finished off in front by Kohl Bauml.  Carson Stadnyk added the exclamation point in the final seconds as the ‘Tips earned a 5-1 victory.

Bolton Pouliot (4-2-0-0) made a number of tough saves among his 20 in a losing cause as Kamloops finished with a 29-25 shot advantage.  Both teams were 1 for 3 on the powerplay.

The Silvertips continue a three-game road swing next weekend with a pair of games in eastern Washington against the Tri-City Americans on Friday night and the Spokane Chiefs on Saturday.  Both games are set to face-off at 7:05 pm with radio broadcast coverage starting at 6:30.  Friday’s game can be heard live on Classic Country 1520 KXA, while Saturday’s contest will air on Fox Sports 1380.