Silvertips feel the power in won over Blades 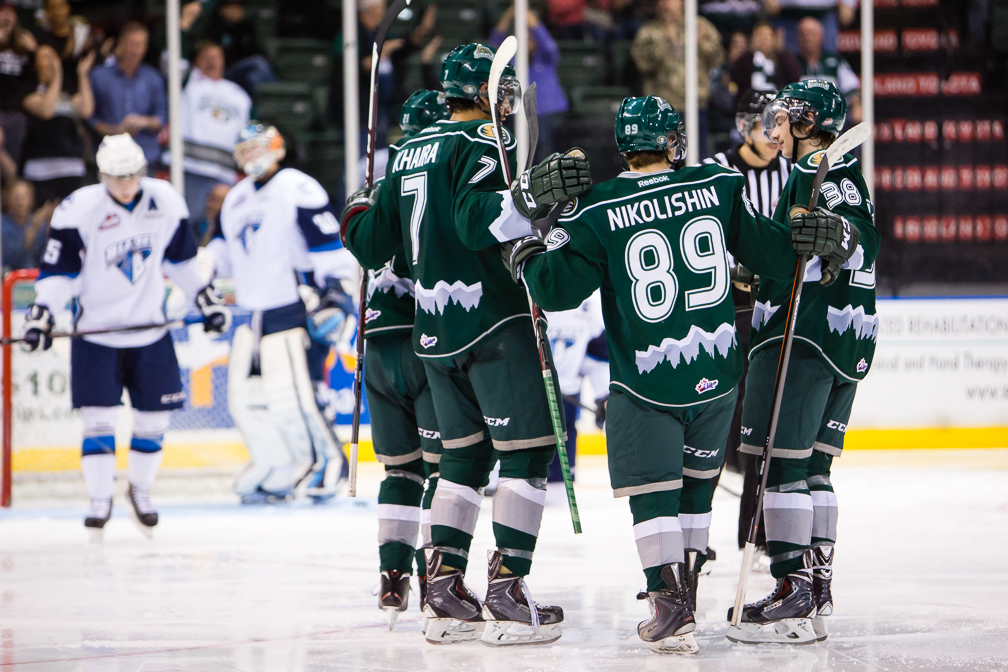 EVERETT – A franchise record-tying five powerplay goals propelled the Everett Silvertips to a 5-1 victory over the Saskatoon Blades in front of over 5,800 fans Saturday night at Comcast Arena.  Extending their win streak to five straight games, the Silvertips also became the first WHL team to reach 20 victories this season and remained in first place in the league standings.

Saskatoon native and former Blade Matt Pufahl scored two goals and assisted on another as the ‘Tips matched the best powerplay production in franchise history with five goals on seven opportunities.  Josh Winquist extended his scoring streak to 17 games with three assists on the night, while Ivan Nikolishin also had a three-point effort with one goal and two assists.  Saskatoon product Kohl Bauml also scored for Everett, who also got a goal from rookie Matt Fonteyne on his 16th birthday and two assists from Jujhar Khaira.

The Silvertips outshot the Blades 16-4 in the first, but were unable to score as the game remained scoreless after 20 minutes.  The ‘Tips broke through early in the second on a carry-over powerplay from the first as Josh Winquist drew the defense toward him on the left boards and then set up Ivan Nikolishin for a cross-ice one-timer into an open net to make it 1-0.  Midway through the period Nikolishin drew two penalties on one sequence to create a lengthy 5-on-3 powerplay, which resulted in a goal just 17 seconds later when former Blades defenseman Matt Pufahl fired a rocket off the cross bar and in from the blue line.

On another powerplay less than three minutes after Pufahl’s goal, Kohl Bauml banged in the rebound of another Pufahl point shot to put Everett up 3-0.  Saskatoon got on the board at 13:33 after a nice passing play from their top line, with Austin Lotz turning away a flurry of shots before Nikita Scherbak was able to lift the puck over him to make it a 3-1 game heading into the final frame.

Everett allowed only one Saskatoon shot in the third period and added two more powerplay goals to cap off the win.  Midway through the third on their sixth powerplay, Pufahl sent a shot low along the ice through the legs of goaltender Troy Trombley for his second of the night.  The Silvertips were awarded another powerplay late in the game and capped off the scoring when Ivan Nikolishin’s long wrist shot caromed off Matt Fonteyne and in past Trombley with 27 seconds left.

Austin Lotz (15-3-1-0) made 15 saves to earn the victory as the final shot count was 39-16 in favor of Everett.  Troy Trombley (3-6-0-1) turned away 34 shots in net for the Blades.  Everett stopped Saskatoon’s league-leading powerplay unit on three of its attempts.

The Silvertips are back on home ice Tuesday night at 7:05 pm for their second meeting of the year with the defending WHL Champion Portland Winterhawks.  It’s also the second game of our Christmas House Holiday Drive to help local low-income families have a brighter holiday season.  Everett then plays a pair of road games in Kelowna and Kamloops, British Columbia over the weekend.

Season tickets, mini-game packages and six-game packs for the 2013-14 WHL season are available now at the team office. Visit our website or call 425-252-5100 for more information.  To keep up with all the latest team news, “like” the Everett Silvertips Hockey Club on Facebook or follow @WHLSilvertips on Twitter.