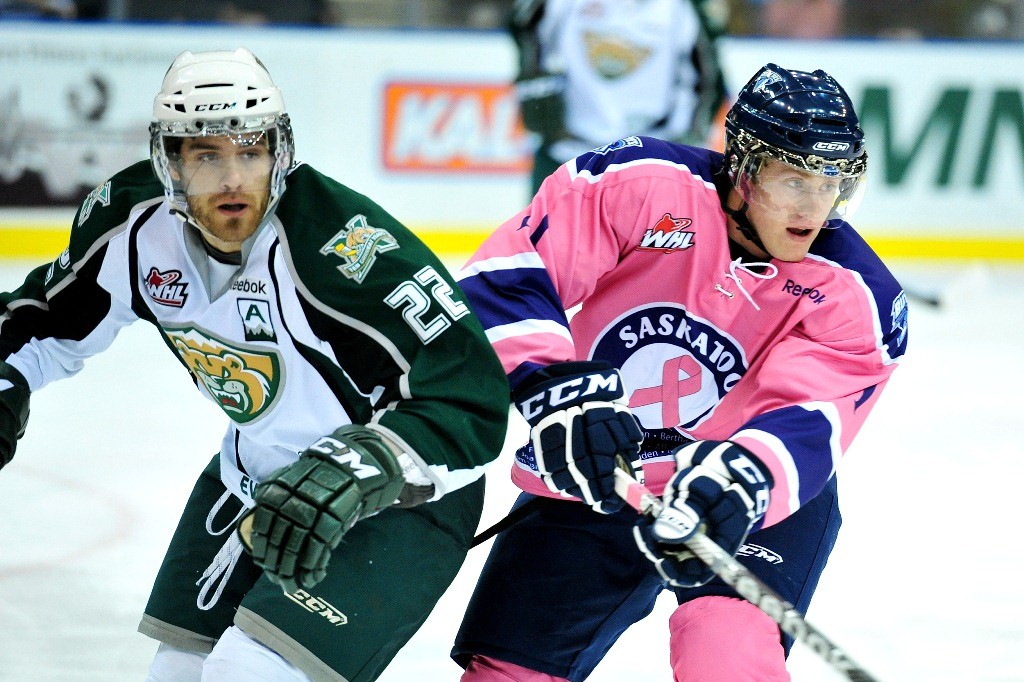 SASKATOON, SK – Josh Winquist scored twice in the third period to lift the Everett Silvertips to a 3-2 victory over the Saskatoon Blades Saturday night at the Credit Union Centre.  The victory extends the win streak to three straight games for the Silvertips, who finish their six-game East Division road trip with four victories.

The two scores gave Winquist five points in his last two games and 13 points for the season.  Both goals were assisted by Ryan Murray, and Manraj Hayer finished the night with a goal and an assist for Everett as well.  Daniel Cotton (4-2) turned aside 31 of the 33 shots he faced at the other end to earn his third straight win as the ‘Tips have now won three straight road games for the first time since February 2011.

The Blades struck first on the powerplay midway through the first period when Darren Dietz scored on a slapshot from the left point at 10:21.  Everett came on later in the period to generate a few chances and eventually outshot Saskatoon 12-10 despite heading into the locker room with a 1-0 deficit.

The Silvertips built momentum in the second period and eventually tied the game at 14:01.  After a turnover by Saskatoon, Tyler Sandhu got the puck from Landon Oslanski and sent a pass into the slot for a streaking Manraj Hayer, who beat Andrey Makarov to make it 1-1.  The ‘Tips nearly took the lead on numerous occasions late in the period, but the game remained even heading into the locker room.

Everett jumped ahead in the third during an odd-man rush led by Murray.  Murray passed to Hayer, who quickly fed Winquist in the low slot for the finish.  The Silvertips maintained the 2-1 lead and then added to it off a faceoff win as Murray sent a quick pass to the front for Winquist, who spun around the goaltender and tucked in his second of the night at 15:06.  With a powerplay chance and the net empty late in regulation, Deitz scored his second of the night to get the Blades back within one, but the ‘Tips finished off the 3-2 victory in the final minute.

Andrey Makarov (6-7-0-0) took the loss in goal for Saskatoon despite 24 saves as the Blades outshot the Silvertips 33-27.  Everett was 0 for 2 on the powerplay, while Saskatoon scored twice on five opportunities.

With their longest road trip of the season now complete, the Silvertips will return to Everett and have five days off before hosting a pair of home games next weekend at Comcast Arena.  The ‘Tips face the Spokane Chiefs Friday at 7:35 pm and then take on the Seattle Thunderbirds Saturday at 7:05 pm in our fourth annual “Pink the Rink” game to raise money for the local fight against breast cancer.