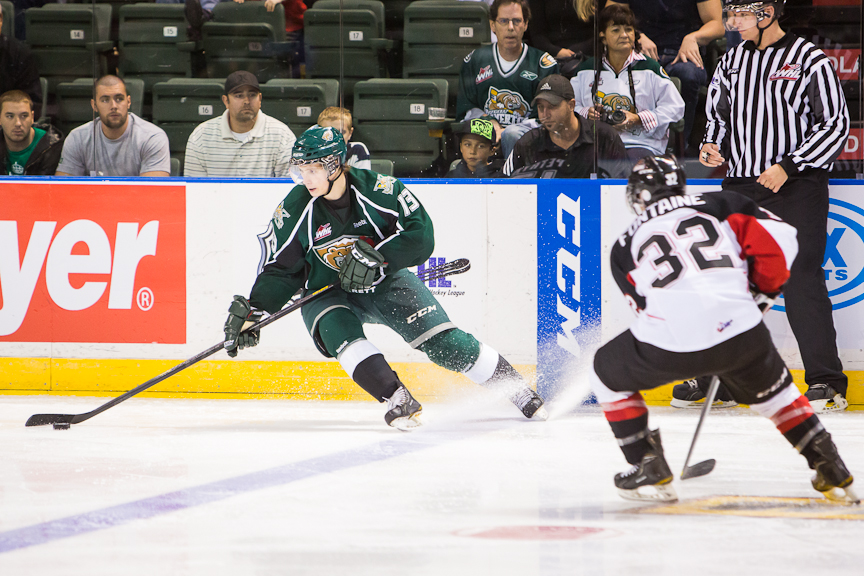 VANCOUVER, BC – The Everett Silvertips scored big goals when they needed them most to earn their first victory of the year Friday night, defeating the Vancouver Giants 5-3 at Pacific Coliseum.  The Silvertips improve to 1-2-0-1 now in the young season and have posted their first road win nearly a month earlier than they did last season.

Austin Lotz stopped 34 of 37 shots to earn the win in goal as Vancouver finished with a 37-21 shot advantage.  Reid Petryk scored twice for Everett, while Josh Winquist posted a goal and an assist.  Manraj Hayer and Mirco Mueller also lit the lamp for the ‘Tips.  In addition to Mueller’s first WHL goal, Silvertips rookies Ty Mappin and Stathis Soumelidis notched their first career points with assists in the contest.

The Silvertips jumped out to another early lead on Friday when Mirco Mueller skated down the left boards and blasted a perfect slapshot inside the far post just over two minutes in.  Vancouver answered later in the period, tying it up on a 3-on-2 rush as John Niebrandt sent a long shot off the post and in behind Austin Lotz to leave the game tied at one after the first.

Everett quickly retook the lead and then extended it with two early second-period goals in a span of only 22 seconds.  First Ryan Murray jumped on a loose puck at center and quickly started the rush for the ‘Tips, sending a pass into the slot for Reid Petryk for his first goal of the year.  The Silvertips kept coming off the ensuing faceoff as Josh Winquist won a race to the puck along the end boards and quickly centered a pass to Manraj Hayer, who one-timed it past Liam Liston for a 3-1 Everett lead.   Trevor Cheek scored a powerplay goal for the Giants on a long, screened wrist shot later in the period to cut into the deficit.  Vancouver held a 30-11 shot edge through 40 minutes, but the Silvertips led 3-2.

The ‘Tips kept the early-period magic going in the third when Petryk stole a puck at the Vancouver line and got behind the defense before depositing a backhander to make it 4-2 and chase Liam Liston from the net.  The Giants then got back within one again thanks to a tip-in goal from Tristan Sieben in front of the net.  Winquist provided Everett’s final cushion at 13:08 however, stickhandling in tight quarters through the defense before finishing off a pretty goal to make it 5-3.

Liam Liston stopped 9 of 13 shots in nearly 42 minutes for Vancouver before being relieved by Tyler Fuhr, who made 7 saves on 8 shots in 17 minutes of action.  Everett had only one powerplay and did not score, while the Giants converted one of their three opportunities.

The Silvertips have both Saturday and Sunday off this weekend before returning to the Comcast Arena ice for their next game Wednesday at 7:05 pm.  Everett will host the Tri-City Americans in that contest and again on Sunday at 5:05 pm, with a road game Saturday in Kent against the Seattle Thunderbirds coming up in between.