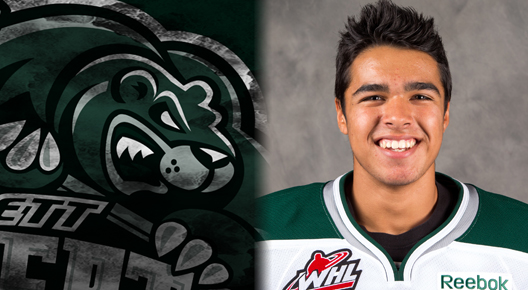 EVERETT – The Everett Silvertips today announced the addition of defenseman Jordan Wharrie to the roster as the team prepares to return to home ice after the WHL’s holiday break Friday night against the rival Seattle Thunderbirds.  Wharrie will remain with the Silvertips while defensemen Mirco Mueller, Kevin Davis and Noah Juulsen are away at international tournaments.

Wharrie, 16, was Everett’s fifth-round selection (98th overall) in the 2012 WHL Bantam Draft.  The Port Moody, British Columbia native is spending this season in his hometown with the Port Moody Panthers of the Pacific Junior Hockey League.  In 31 games with the Panthers this season, Wharrie has contributed five goals and 19 points to lead all defensemen and rank fourth on the club in scoring.  His 14 assists are second-most on the team and he has also totaled 40 minutes in penalties this year.  The 6-foot-2, 165-pound blueliner signed with the Silvertips during the preseason.

The addition of Wharrie gives the Silvertips six available defensemen while three regulars are away competing internationally.  Mueller is currently skating for Team Switzerland at the 2014 IIHF World Junior Championship, which runs through January 5 in Malmö, Sweden.  Davis and Juulsen are both in Cape Breton, Nova Scotia to represent Team (Canada) Pacific at the 2014 World Under-17 Hockey Challenge, which opens Sunday and continues through Saturday, January 4.

After a nine-day respite for the holidays, the Silvertips resume action Friday night with the first game of a home-and-home set against the rival Seattle Thunderbirds at 7:35 pm at Comcast Arena.  The teams meet again at the ShoWare Center in Kent Saturday night at 7:05.

Silvertips holiday packs, mini-game plans and six-game packs for the 2013-14 WHL season are available now at the team office. Visit our website or call 425-252-5100 for more information.  To keep up with all the latest team news, “like” the Everett Silvertips Hockey Club on Facebook or follow @WHLSilvertips on Twitter.