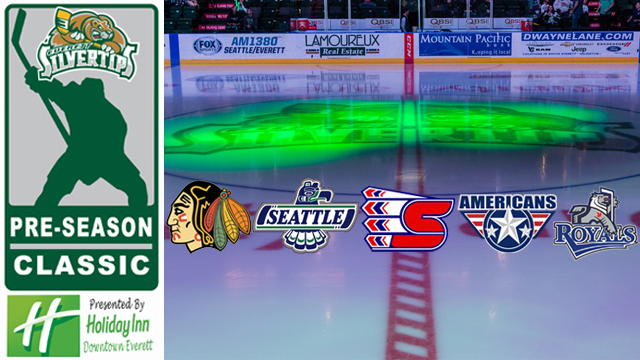 EVERETT – The Everett Silvertips today announced their 2015 WHL exhibition schedule highlighted by the 12th annual Holiday Inn Preseason Classic tournament over Labor Day weekend at XFINITY Arena.  The ‘Tips will play a total of seven preseason games, skating on home ice three times during their home tournament and welcoming the Victoria Royals back to Everett to conclude the preseason on September 19.

CLICK HERE for a printable preseason schedule in PDF format.

This year’s Holiday Inn Preseason Classic at XFINITY Arena once again features the WHL’s five U.S. Division teams plus the Victoria Royals competing in three games per day (starting at 11:30 am, 3:00 pm and 7:00 pm) from Friday, September 4 to Sunday, September 6.  The Silvertips are in action at 7:00 pm all three days, facing the Victoria Royals Friday, the Spokane Chiefs Saturday and the Portland Winterhawks on Sunday.

Ticket packages including all nine games of the Holiday Inn Preseason Classic are available now for $75 per seat – CLICK HERE for more information or to buy yours today.  Silvertips season ticket and package holders will soon have an opportunity to purchase full preseason packages including each of the nine tournament games and the September 19 preseason finale vs. Victoria for just $65 per seat.

Single game tickets for the 2015 preseason will be available starting Thursday, August 6 @ Noon.  Seating for all preseason games at XFINITY Arena is general admission.