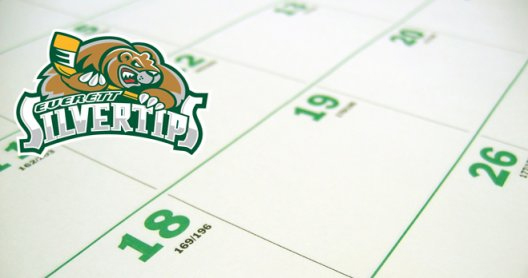 EVERETT – The Everett Silvertips today announced their full schedule for the 2014-15 regular season, their 12th in the Western Hockey League.  One of only four teams to qualify for the WHL playoffs in each of the last 11 seasons, Everett will look to improve upon last year’s 39-win campaign starting with their season opener on the road against the rival Seattle Thunderbirds on Saturday, September 20.

The Silvertips’ 2014-15 home opener at Comcast Arena will be played on Friday, October 3 against last year’s regular season champions, the Kelowna Rockets.  The ‘Tips will be right back on their home ice in the “Sea of Green” vs. the defending Western Conference champion Portland Winterhawks the following night on Saturday, October 4.

27 of Everett’s 36 home dates during the upcoming season will be played on weekends, including 13 Friday nights, 11 Saturdays and three Sundays.  After a positive response to last year’s change, Sunday home games will start at 4:05 pm for the second straight year.  The Silvertips’ two longest homestands each feature five consecutive games in downtown Everett, one of which runs from Thanksgiving week into December with the other coming in February.  The home finale is set for Saturday, March 21 vs. the Victoria Royals before the ‘Tips close the regular season the following day in Spokane.

All five home games against the cross-town rival Seattle Thunderbirds will again be played on prime weekend dates, including three Saturdays (highlighted by our sixth annual “Pink the Rink” breast cancer fundraiser on October 25) and two Fridays.  A matchup against the defending WHL and Memorial Cup champion Edmonton Oil Kings on Saturday, November 1 highlights six biennial visits from the WHL’s Central Division clubs.  Everett’s six-game Canadian road trip through the East Division falls in January, as does another four-game journey to Prince George and Kelowna.

Along with the schedule, the Silvertips have announced a special presale on six-game packs and group bookings for the upcoming season before they go on sale to general public on July 8.  Game selection forms for mini-game package buyers will be available in late July.  Single-game tickets for opening weekend will be available on August 8, with individual tickets for all other home games going on sale on August 28.

CLICK HERE for the Silvertips complete 2014-15 schedule in calendar format.

Visit everettsilvertips.com throughout the offseason for news and updates on our summer appearances, the NHL Draft, CHL Import Draft and much more.  For more information, call the team office at 425-252-5100, “like” the Everett Silvertips Hockey Club on Facebook or follow @WHLSilvertips on Twitter.