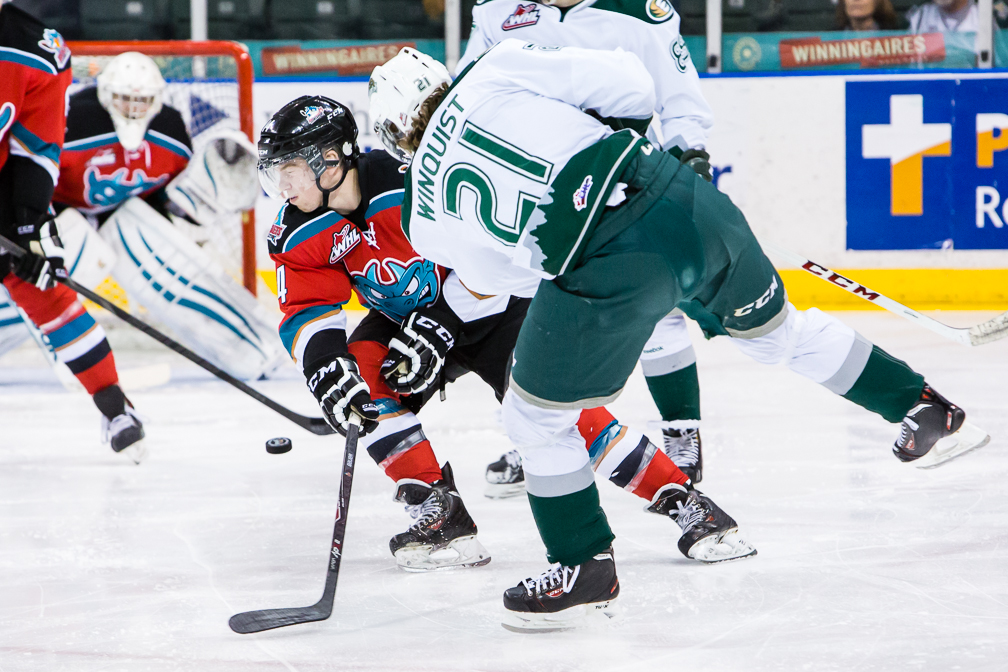 EVERETT – The Everett Silvertips scored five unanswered goals through two periods and cruised to a 5-1 victory over the top-ranked Kelowna Rockets Tuesday night at Comcast Arena.  The victory extended Everett’s win streak to four games while ending an eight-game losing streak against the Rockets and bringing the ‘Tips to within one point of the fifth-place Spokane Chiefs in the Western Conference.

Leading scorer Josh Winquist recorded two goals among his three points, making him just the third Silvertip to reach the 40-goal plateau in a single season.  He now sits just one score back of Shane Harper’s franchise record with 41 goals this season.  Jujhar Khaira, Ben Betker and Carson Stadnyk each contributed a goal and an assist as well, while Ivan Nikolishin drew two assists.  The ‘Tips handed Kelowna just its tenth regulation loss of the year and became the first team to beat the Rockets by more than three goals.

The Silvertips looked strong throughout the first period on their way to outshooting the Rockets 14-7.  After 11 minutes of scoreless hockey, Ivan Nikolishin fired a shot from the top of the circle with Jujhar Khaira there to pick up the rebound and fire it into the open net to get Everett on the board.  While the ‘Tips first goal was being announced, Ben Betker joined the rush off the faceoff and finished off a pass from Carson Stadnyk at the doorstep just 22 seconds later.  The Silvertips carried the play for the remainder of the period to maintain a two-goal lead heading into the dressing room.

Everett had three powerplays in the middle period, but scored three more even strength goals in the second half of the period to take a five-goal advantage.  The puck was just outside the Kelowna blue line when Khaira poked it ahead to create breakaway for Josh Winquist, who tucked the puck between the legs of goaltender Jackson Whistle for his 40th goal of the season.  Carson Stadnyk then joined the goal scoring as he cut across the slot and lifted a well-placed backhand shot into the top right corner to make it 4-0 at 16:33.  The Silvertips’ fifth goal came less than 90 seconds later as the rebound of a Betker point shot bounced to Winquist, who batted it in to come within one goal of Harper’s team recor.d.  Everett held a 27-13 lead on the shot clock after 40 minutes of play.

The Rockets began the third with goaltender Jordon Cooke in net to relieve Jackson Whistle.  Kelowna got on the board early after the rebound of a Myles Bell shot ricocheted off the pad of Lotz to Justin Kirkland for the finish at 4:49.  Lotz made a clutch pad save midway through the period during a 2-on-1 to prevent a goal and the Rockets’ comeback from taking shape as the ‘Tips finished off the 5-1 victory.  Everett finished the night with a 38-24 advantage in shots.

Five of Everett’s last six regular season games will now be played on the road, starting with visits to the Tri-City Americans on Friday and the Seattle Thunderbirds on Saturday.  Both games get underway at 7:05 pm with pregame radio coverage starting at 6:30 on Fox Sports 1380 AM.  The Silvertips’ last home game of the regular season comes up on Saturday, March 15 against the Victoria Royals.

Silvertips flex packs and single game tickets for our remaining 2013-14 home games are available now at the team office. Visit our website or call 425-252-5100 for more information.  To keep up with all the latest team news, “like” the Everett Silvertips Hockey Club on Facebook or follow @WHLSilvertips on Twitter.