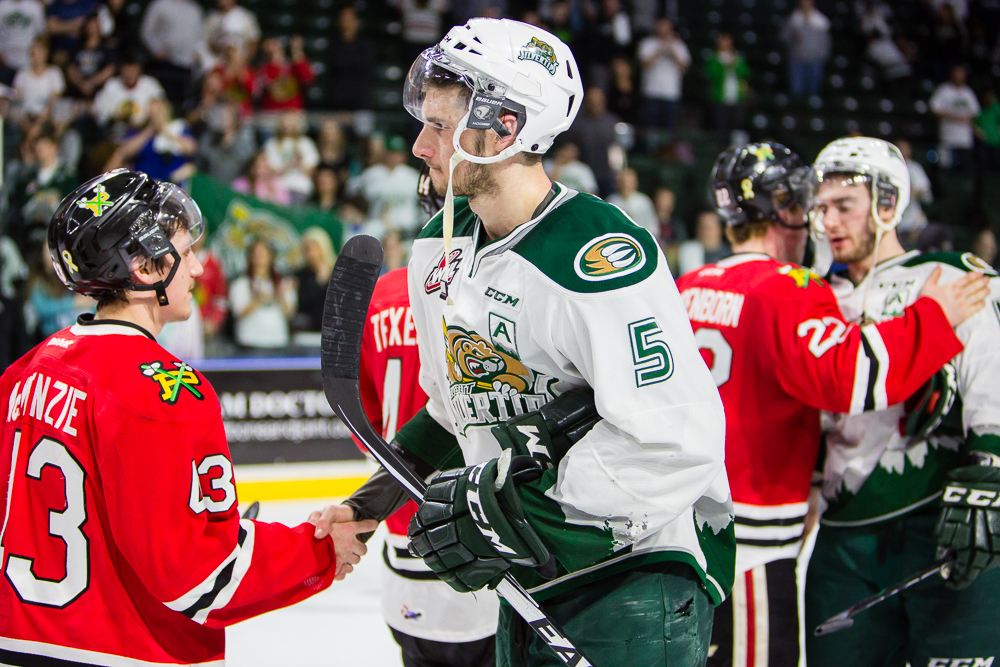 EVERETT – The Everett Silvertips fought hard throughout the night, but couldn’t recover from a two-goal second period deficit despite a strong third as the Portland Winterhawks came away with a 3-2 victory in Game 5 of their second-round playoff series Sunday evening at XFINITY Arena.  The loss eliminates the U.S. Division Champion Silvertips from the WHL Playoffs as Portland advances to meet the Kelowna Rockets in the Western Conference Final.

Cole MacDonald scored for the Silvertips to end the series with a team-leading six points (1g/5a).  Jordan Wharrie scored his first career playoff goal, while Nikita Scherbak recorded a pair of assists and was named third star of the game for his efforts.  Graham Millar and 15-year-old Jantzen Leslie also picked up assists to round out the scoring for Everett.

Everett was forced to battle back from a deficit early in the game after the Winterhawks opened scoring in the first.  Nic Petan released a wrist shot from the side of the net on a Portland powerplay that gave the Hawks a 1-0 lead at 6:43.  The Silvertips followed up with a powerplay of their own where Remi Laurencelle created back-to-back chances to tie the game that went unfinished.  After a save by goaltender Carter Hart a short time later, Nikita Scherbak quickly started a rush into the Portland zone, where Jordan Wharrie scored from the right circle to tie the game at one.  The ‘Tips held a 13-12 advantage on the shot clock after the first 20 minutes.

The start of the second period didn’t start well for the ‘Tips after Oliver Bjorkstrand scored on the rebound of a Nic Petan shot early in the frame.  Everett was hard-pressed to get out of their own zone through much of the period with the Winterhawks successfully controlling the puck.  A Silvertips push then turned into an odd-man rush for Portland where Bjorkstrand scored his second of the night to give the Hawks a 3-1 lead.  The ‘Tips built momentum late in the frame and after a rush into the Winterhawks zone, Cole MacDonald scored from the high slot off a Scherbak feed to bring Everett within 3-2 to end the second.

The Silvertips pushed hard to avoid elimination in the final 20 minutes with scoring chances throughout the frame.  Ben Betker came streaking out of the penalty box and took a lead pass from Lukas Skrumeda to get a shot on net, but had his stick lifted by a defender at the last moment.  Winterhawks goaltender Adin Hill made a game-changing save to rob Ivan Nikolishin, who looked to have an open net as he received a pass from Carson Stadnyk following a Portland turnover.  By the final minutes of the frame, Everett had regained lead on the shot clock with a 12-7 edge in the period.  The Silvertips pulled goaltender Carter Hart for an extra attacker in the final minutes of the game, but after numerous close calls time expired with the Hawks taking a 3-2 victory.

The Silvertips will now turn their attention to the offseason, with the WHL Bantam Draft just weeks away and preparations for the 2015-16 season starting shortly.  To keep up with all the latest Silvertips news and information throughout the offseason, visit www.everettsilvertips.com, “like” the Everett Silvertips Hockey Club on Facebook or follow @WHLSilvertips on Twitter