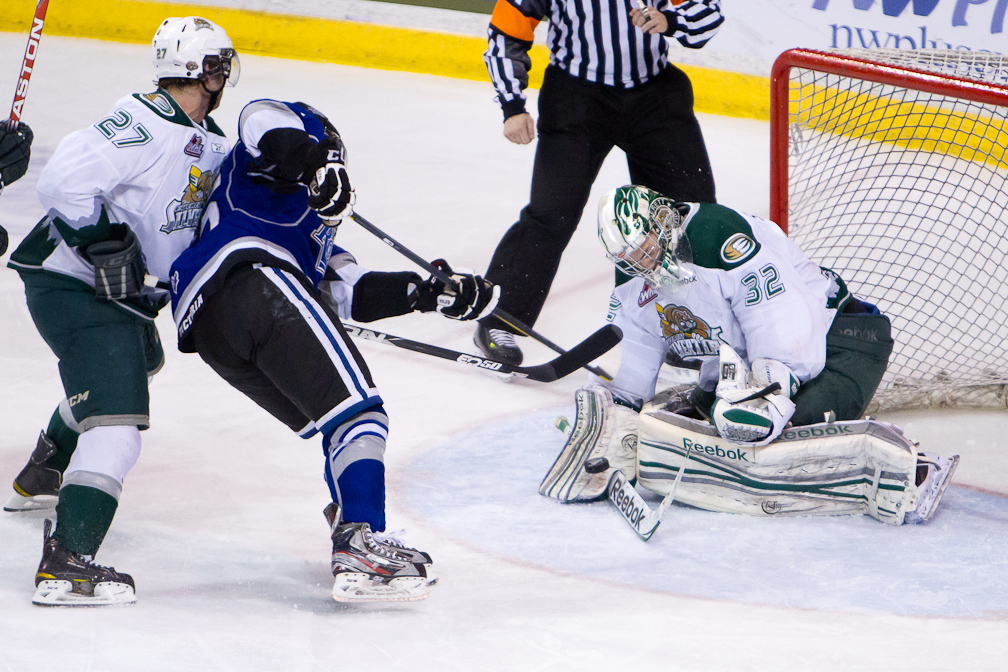 EVERETT, WA – The Everett Silvertips completed their home schedule in style Saturday night at Comcast Arena, defeating the Victoria Royals 3-0 before nearly 8,000 fans in their last regular season home game.  The win put Everett back ahead of Victoria for seventh place in the WHL’s Western Conference and completed a four-game sweep in the season series with the Royals.

Cody Fowlie scored two goals and Brennan Yadlowski assisted on all three for the Silvertips, while Kent Simpson turned aside all 26 shots he faced to earn his second shutout in the last five games.  Josh Winquist netted Everett’s other tally as the ‘Tips scored shorthanded and on the powerplay in the third period to grow a 1-0 lead into a 3-0 win.  Yadlowski reached both 100 points and 500 penalty minutes in his WHL career in the contest as well.

The Silvertips got out to the start they wanted, recording the only goal in a well-played first period.  Just 3:19 into the game, Fowlie re-directed Ryan Murray’s shot from the left boards into the net to give the ‘Tips a 1-0 lead.  Victoria finished the period with a 13-10 edge in shots, but Everett maintained the 1-0 lead.

The teams traded unsuccessful powerplay in the second, with the Silvertips unable to build on the lead despite a double-minor for high sticking to the Royals’ Logan Nelson.  Each team sent eight shots to the net and the game stayed 1-0 for Everett going into the third.

On the penalty kill to start the final period, the Silvertips were finally able to extend the lead with a shorthanded goal.  Josh Winquist had two shots blocked during a shorthanded rush, but stayed with the play and finally beat Keith Hamilton on the third try for his sixth goal in the past seven games.  Great puck movement on the powerplay led to another goal minutes later, as Brennan Yadlowski and Ryan Harrison set up Fowlie in the slot for his second goal of the night at 5:05.  Everett cruised the rest of the way, with Victoria getting just five third-period shots as Simpson brought home the shutout.

With the home portion of their schedule now complete, the Silvertips will make the short trip to Kent to complete this weekend’s three-in-three  with an important game Sunday afternoon against the Seattle Thunderbirds.  Opening faceoff is set for 5:05 pm at the ShoWare Center as the ‘Tips look for a win that would pull them closer to clinching a Western Conference playoff spot.

Check everettsilvertips.com, the Everett Herald and Fox Sports 1380 AM to track the Silvertips’ progress on the road during the final week of the WHL regular season.  Information on potential first-round postseason schedules and ticket packages will become available in the event the Silvertips officially clinch a playoff spot.